History:
QR does are two dimensional codes which are usually black and white and in a form of a square. The pixel within the square have data encoded, most likely an URL.
Smart phones with cameras can scan this code and display the encoded content. If it is an URL it will open a website.
The user needs to use either a QR scanner software or can use google goggles to scan the code.

QR codes started in Japan in 1994 when Denso invented the system. Since then the QR code usage in Japan grew extremely and is almost a standard feature on Business cards. Mostly these codes link to a page with a virtual business card which then the user can download to the phone. Japan has much longer than the US phones with cameras which is most important part to scan barcodes.

Today in Japan everybody from Mickey & Co. to Nike are getting in the act, and revolutionizing outdoor advertising in the process. 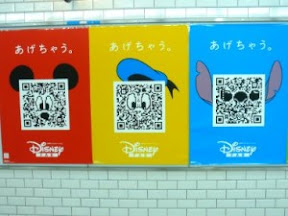 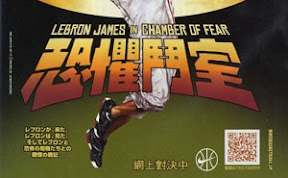 QR codes in Europe for advertising are since 2004 very common when camera phones started to be popular.
A Portuguese wineyard (Cortes de Cima) is printing QR codes on all their wine labels. Consumers can scan them in the store to get more detailed information about the wine. 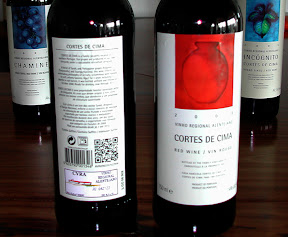 In the US QR codes just now coming for commercial use and advertising. However companies like Philip Morris are using them since years on their cigarette packages for inventory counts and shipping. We don't have in America yet a standard for these codes like in Europe or Japan. Even Microsoft has their own code method.
The consumers here in the US get more and more interests as we can see in the search statistic at google for qr code search.

The future of QR codes
We are right now in a QR code hype and three years behind Europe and Japan. But finally we are understanding that QR code is the missing piece between on the road (mobile), brick and mortar store and Internet.
These little codes don't take a lot of space an can be scanned in any direction. But the underlying URL can bring a consumer to web pages with much more information than a store could display for each product.

Would it not be great to go to Target and find a toy for our son. But we are not sure if there are enough accessories for this toy available. We scan the code and on our smart phone opens a webpage with all accessories we could buy for this toy.

Or we scan the code, because we like the product so much, and automatically we are fans with this product Facebook page.

ItWowed.Me, a new smartphone technology platform developed by Majestic Media Ltd., allows businesses and brands to drive audiences to Facebook fan pages and convert them into fans.
"Like" something in real life? By placing a Quick Response (QR) code on real world objects, smartphone users can now scan these codes with their iPhone, Android, BlackBerry or any smartphone device and instantly "Like" the real world product or business on Facebook, thus sharing it with their friends on the social media site.

Verizon teamed with scanlife to promote a campaign to show how many apps are available for droid devices. It was an integrated campaign with print ads, banner ads and even ads on iPad. Within only three months they counted 150,000 scans. See the results here. This is a great success.

We read almost everyday about QR codes printed on walls in subways or QR codes in magazines. Polo Ralph Lauren was one of the first companies in US in 2008 who did a nation wide QR code campaign. All their print ads had codes which a consumer could scan to get directly to the product page of the advertised product to buy.

QR codes are as well perfect to combine augmented reality with real life and Internet.
Imagine you are at Walmart looking for a game and want to know the ratings and want to know what your friends are thinking about the game? Just scan the code and you instantly see the main character of the game in the screen in front of you telling you the average rating and who of your friends talked about it on facebook. The background of the screen is the store image live from your camera and the character is following your movements.
Or you want to buy a new bed, you take at home a picture of your bedroom. At the store you scan the code of a bed you like and it will instantly show up on the photo of your room. You move the bed a little around till you like the position. You save the image and send it as multi media message to your spouse who is 3000 miles away. Would this not be great?

Bottom line, the technology is easy to understand. Open the bar code scanner software and make a picture of the code and then everything else works like magic.
Brands can advertise and educate consumers without the need for more space than 2 inches of the product packaging.
This is all needed to connect the consumer with social, to offer the consumer more important information to make the buying decision or just to wake interests for the consumer to do something.

QR codes are so new and still rare in the US that even having QR codes on Internet ads will increase clicks on banners because the user wants to know what is behind this weird looking square.
The ad below got an average CTR of 1.34% which is 400% higher than industry standard and a scan rate of 0.47% which totals the interaction to 1.81%

In two years we don't talk anymore about QR codes they are just a part of our life.