Microsoft released new mobile platform. According to Microsoft their last attempt in mobile. Microsoft will not take another try when it fails, but I believe the new OS will be a very strong contester.
Microsoft worked many years on their new mobile platform and the result is Windows Phone 7, which will make its debut in some European markets on Oct. 21 and in the U.S. Nov. 8. The phone uses an elegant operating system that is very different from the current trend toward app-focused phones. Instead it provides active and configurable interface elements called tiles that update on the fly with real information, allowing users to place the tiles that interest them most where they want on their Start screen. Facebook photos, music and contacts are pulled into the phone and distributed appropriately across Hubs. It also brings together many of Microsoft’s popular offerings from other platforms, including Xbox, Zune, Office and Bing and Sharepoint. 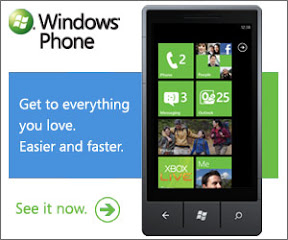 The new phone is an important step for Microsoft in four ways. To begin, it is a completely fresh start for Microsoft in smartphones. Second, it represents a new approach from Microsoft toward integrating products and services from across the company into the phone to create a richer experience and greater productivity. Hence the presence of Office, Zune and Xbox LIVE and their integration within the Hub model. Third the new phone approach is critical to Microsoft’s efforts to make new gains in the huge smartphone market, which despite the success of the iPhone and Android is still relatively untapped globally. 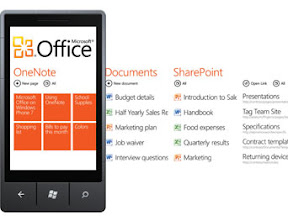 But finally Microsoft does understand that their PC market share is over 95% and a big advantage in comparison to Android and iPhone.
A lot of consumers might switch to Microsoft, if Mobile 7 does seamlessly connect and integrate with Windows OS on PC and at the same time offers same functions for social and games like the competition.

I am only using the iPhone because all my other hardware is Apple and my media hub is iTunes. If I would not be so much relying on Apple I might have switch to an Android phone. Pretty sure a lot of potential Android users would switch to a Microsoft phone if the phone has similar service but better integration to their OS, it should be a no-brainer.

Then we have the business world, the new Mobile 7 phones will be a big threat for Blackberry if a seamless integration to Exchange works. Plus many companies are using Enterprise solutions from Microsoft. To access them through mobile is many times pretty expensive because they won't work on other browsers than IE and companies have to buy expensive 3rd party software for their mobile devices to access MS Enterprise products. This expensive cost could instantly go away with mobile 7 and IE.

Last but not least mobile does not stop with phones there is as well the keyboard less tablets business, which is right now dominated by the iPad but imagine all would be MS.
In order that I can use my iPad for work, i had to buy tons of software like numbers, pages, keynote, iConnect, logMeIn and more software to integrate the iPad for work. This was at least $100. MS could offer this for just $30 if you already have an office license for PC. And because none of these products are Microsoft native I can't convert them 100% and always lose a lot of functions.

I can see MS will get in the business world a market share of 70% within 2 years and in consumer market a 30% share within 3 years, if the concept is right and the phones offer enough service.

We will have again three main platforms and RIM will not be one of these.
Microsoft just needs to stay ahead and keep focused on mobile as an important business.