Facebook is hosting a mobile event on Wednesday, the question is what will be shown and talked about. 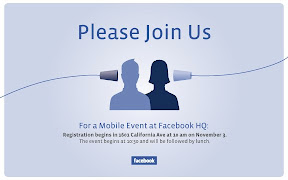 Many people did talk about a Facebook phone, but Mark Z. Did deny that a Facebook phone will come. And to be honest i don't think a phone would fit in FB strategy. Maybe a Nokia, HTC etc would team up and build a total social integration phone. Google tried to ace their own phone and it sucked. Both companies don't have enough experience and not enough customer services to sell phones.

Here some ideas what could come at the event.

1. New mobile apps, including a an iPad app
Facebook mobile apps are poor, just good to use but not really good enough to do great things. The iPad is missing a Facebook app, because it could be seen as full browser device. However iPad does not support flash, therefore a special iPad app would be great.
It’s been awhile since Facebook did a rethinking of its mobile apps, and it would seem about time for the world’s largest social network to redo its suite of mobile apps, possibly with Skype and Facebook Credits (for mobile payments) integration. Many people are especially hoping to see a redone Android app, as of all the platforms, the Android app is probably the most lacking.

2. Facebook Places check-in deals
A few days ago, we heard report/rumor that Facebook is already running check-in deals for Facebook Places with a select number of partners. Facebook wouldn’t comment on this, but they didn’t deny it either, so it could be that this will at least be a part of the announcement (again, it would be a nice feature in a revamped line of mobile apps).

3. Facebook mobile SDK, app store
Facebook could announce a SDK for mobile devices to allow developers to build FB apps which are running on Androids and iPhone. However this would not really make sense for hence the developer then needs 2 SDKs? One for the Os and one for FB?
But if FB thinking to have their own phone then it would make sense.
But i think most likely FB will offer an app store the FB users have easier to find apps in FB and to start to sell apps not only free apps.

4. Announce of HTML5 only
Many apps in FB are done in flash and not really mobile friendly. FB might announce that all apps have to be done in HTML5 that they can stay on FB. Or the apps need to have a none flash version available to stay on the FB list.

5. A Facebook phone
The world’s largest social network offering an optimized phone/OS would be somewhat risky at this point, though Facebook has certainly taken risks before (with many of them paying off handsomely). This would be a risk into the hardware sector – or they decide just to offer the OS. Not sure if FB has even enough experience in OS.

The real question in our minds is who would the Facebook phone be for? Would it be a play at developing markets, perhaps leveraging deep Skype integration? Would it focus on mobile payments? Or does Facebook really want to take on the other mobile platforms head-on? Would it just be another “flavor” of Android in conjunction with one of the carriers/phone manufacturers? We might just find out next Wednesday – tune in here and we’ll let you know!