Correction to my blog below:
I got many feedbacks via email and a few as comments, that this software is not to be considered as Trojan. It is more considered as spyware.

The point i did want to make is that smart phones are not excluded from things like this. Which makes is harder for users to keep up and to ensure the data is protected. It is even interesting that there is already more malicous software in the Android app makret (as one wrote in a comment).


I apologize for using wrong terms, but i stay with my point to prefer organzied and cotnrolled app store instead of allowing everything without control and to give developers too much access to the OS.

If you own an Android phone and are cheating on a significant other by arranging secret trysts through text messages, you might want to think twice about your infidelities — or at least about arranging them via texts.

A new Android application released Wednesday, Secret SMS Replicator, when secretly installed on a cellphone, will forward all text messages to any other phone without the owner’s knowledge. Watch the video here:

Zak Tanjeloff, chief executive of the app’s creator, DLP Mobile, said in a news release: “This app is certainly controversial, but can be helpful to people in relationships where this type of monitoring can be useful.”

DLP Mobile also boasts about the clandestine nature of the application: “The app is unique because there is no visible icon or shortcut to access it, so once it’s installed, it will continue to monitor without revealing itself.” 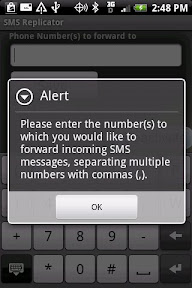 This application is basically an official Trojan horse virus. It does not secretly access all your data on the phone but at least your SMS and send it to whom the installer wants.
It is not really a virus because it must be installed by someone who has access to the phone, but technically we could say virus.

Wikipedia definition of a Trojan horse virus:
Trojan horses are a huge security threat. A Trojan is a program that enters your computer undetected, giving the attacker who planted the Trojan unrestricted access to the data stored on your computer. Trojans can transmit credit card information and other confidential data in the background. Trojans are often not caught by virus scanning engines, because these are focused on viruses, not Trojans. Catching such threats would require the use of a Trojan scanner (a.k.a Trojan cleaner, Trojan remover, anti-Trojan).

I know many people don't like that Apple has their closed app store system and every application has to be approved by Apple, but i rather prefer this than a chaos uncontrolled application market where everybody can do what they want. If we are all only good people and believe in good things, then I would have no problem with an open app world, but unfortunately there are too many people out there who do either for fun or for satisfaction things which can harm. And the last thing I want for my phone is a virus scanner and the fear that my phone could be hacked.
If i compare my Apple computer with Windows, then the biggest difference I see is the speed of the computers after while. And always it comes down to, that i need to run virus scanner, Trojan scanner etc on Windows (to make sure I don't get infected) which slows the Windows computer down.Apple and virus? Not so many so far. Virus scanner not really needed.

DLP Mobile might have the right intension with their Secret SMS Replicator app, but many other developers will suddenly get an idea how to build an invisible app for your phone. This can be easily embedded into a game etc to scan all your phone data. Maybe it is already out there for the Android, we don't know.
I prefer to stay with my iPhone and know that it will be harder to get untruthful apps on it because we have one more level of security which is the Apple team. Maybe the security feeling is a false thinking but it helps me to sleep better.

Many of us are using the smart phones to access our bank accounts or to save passwords and credit card numbers, because it is so convenient to look only in your phone to find what we need. the phone is the item we carry the most with followed by house keys and wallets.