Facebook on Wednesday began letting users form cozy cliques as part of a move to give people more control of their information at the world's most popular online social network.
A "Groups" feature that lets Facebook members set up private online havens for clusters of family, co-workers, teammates, or others was unveiled at a press event at the firm's headquarters in the California city of Palo Alto.
Facebook also began rolling out a feature that will let people download all pictures, video, comments and other digital information they have uploaded to the social networking service. 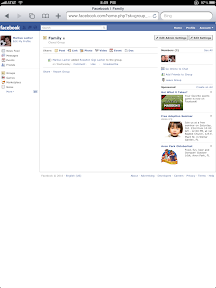 This service makes facebook to the biggest document sharing extranet in the world.
FB is attacking aggressive Google, If Facebook can handle all the informations which will be uploaded.

This is another step to get closer to Google's service. Google docs can of course more, but pretty sure the facebook crowd developers will develop many tools as soon users are starting to upload word or excel documents. Maybe soon we see a word or excel type application on facebook.

The group building (which is similar like the regional network FB once offered) will allow companies to build their own intranet within facebook.

The timing is perfect, many companies have already their Facebook page, building an employee group and allow to upload files (and download) makes it a perfect intranet. Especially for small companies who don't want to spend a lot of money for an intranet.

Explaining the new features, Forrester social computing analyst Augie Ray said "the dialogue during the past year that popped up over privacy issues may have caused people in Facebook to get nervous.
"What we are seeing today is a genuine desire to stop those concerns while at the same time really give people better control," Ray said.
The new features are part of a drive to build Facebook into a "social platform" where people share and connect across the gamut of applications used to swap pictures, messages, videos and more online, according to Zuckerberg.

But Ray is missing the real point, FB wants that users and companies move their communication and files into Facebook as an one stop portal not just a social network.

Google is trying this since years, partly successful but has much less subscribers to their services than people using google as search engine.

Facebook has 500 million subscribers who can use FB service in an instant. I would not be surprised if every user gets a free Facebook email address and mail program.

Once Facebook was in my mind a social hype, now it gets more and more clear that Facebook is more than a hype and more than a social network. It has high potentials to be the one solution for everything platform.

In an earlier post i wrote that FB has only wrong product, i can see that FB is trying to change this to get more legs to stand on, in case one does not work well.

"Groups are about how we are living our lives today," said Hot Potato (company bought this year by FB) founder and Facebook Groups leader Justin Shaffer. "We think this is going to change, fundamentally, how you use Facebook today."
People forming Facebook Groups can make them either open, closed, or secret. Membership and content of open groups is public, while the content of closed groups can only be seen by members. Secret groups hide their membership and contents.

Google watch out for FB, neither Microsoft or Apple are your competition.