At the latest keynote from Apple we first heard how well the Mac sales went in the last five years and if Apple would separate the Mac Computers from the rest of the company then those company would be still #101 in the Inc 500 list. This is pretty amazing.
Plus auto desk is coming back to Apple OS and finally Windows will offer outlook, the best mail program in my opinion.

The next part was the introduction of iLife 11. A lot of changes to see with iLife. The good part is, if you just bought iLife 09 you can upgrade for less than $7. Otherwise the upgrade is $49 or if you buy a new computer it comes free.

iPhoto:
iPhoto has now a much nicer full screen mode, albums are displayed like on the iPad. It has nice Facebook and flickr integration. You can see within iPhoto to each photo what your friends did post to your photo in facebook. 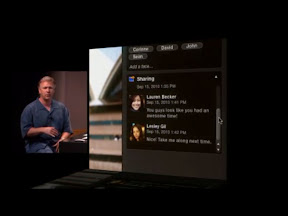 Now we know why Steve had a dinner with Mark Z. Last week. They celebrated their new relationship. I will talk about my opinion to the dinner in another blog.

iPhoto got much more cool slideshows templates and new book templates. It is fascinating how Apple can build such beautiful function which so much logic behind. Both slideshow and books will analyze your photos and bring the photos together either by places, by theme etc. Example if 3 photos have same clouds in the background then these will put close together. Or if images have similar time stamp and so on.

Apple knows how to do the work. Geeks would say they want more freedom, but for rest of us it is so easy now. But still the user can make any changes in order or size etc. We are only limited by the themes Apple offers, we can't create our own themes. With iPhoto 09 I thought there were too less themes but I think now are much more and maybe we can buy more in the future.

iPhoto can now send photos via email without leaving the application. There you can send the photos as attachment or use the apple templates for a cool html email.
And we learned now what Steve Jobs email address is, see image below. 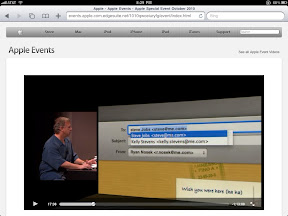 The last new feature is the letterpress card function. We can now order beautiful crafted cards with our text and photos. iPhoto has a video which shows how the letterpress cards are made. The best part is the machine is from Germany. A real Heidelberger press. 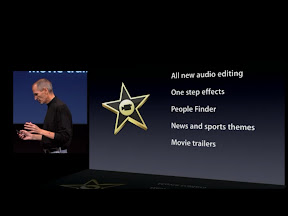 iMovie got a big overhaul with 5 new features. Audio editing was in iMovie 09 pretty poor but now you can edit audio in many ways, a whole clip or only a part of a clip. You can easily change the volume, fade sound in or out or apply cool sound filters.
One step effects allows you to instantly make instantly replays or highlights of scenes.
With people finder iMovie recognized people which are tagged in iPhoto to instantly give them names or group scenes by people.
iMovie has 15 more themes with music taped in London with a symphony orchestra.
The coolest part is movie trailers. Within a few minutes users can create the most stunning trailer, not sure for what we need it but it is very cool.

Garage Band
I am not getting deep in garage band because I never used the old one and i am not so much interested into making my own music.
The new feature in garage band is that you can see how good you played, otherwise some of the existing features like guitar and piano lessons got upgraded. 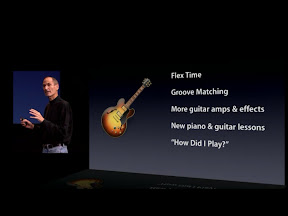 How do I play is like a game, you can see if the timing is off, wrong note played and your overall performance in %. the beauty part is that the professional taped orchestra is playing with you. Get an USB keyboard or guitar and start. As soon garage band will come with drums, i will start using it. 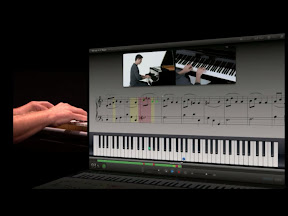 Facetime
Facetime is finally coming to the Mac. No set up to perform it just works and even turns the image if somebody uses the phone and turns the phone. Facetime is since today as beta available.

The new Mac Os X (lion)
Mac OS X will get many features from the iPad. The new Macs will have a bigger touchpad with multiple touch rather than a touchscreen. Apple believes vertical touchscreen does not work, the arms will get fatigue.
The app store concept will come to the macs. Macs will have their own app store to download applications. If you lose an app you can download the app again with no charge. What happens when Apple's DB crashes? I don't know.
Lion will have home screen similar like the iPad and groups like the the iPhone.
Any app can run in full screen mode, if wished, like on iOS, but it is not clear how it works when you have two screens attached to the computer. Can we run two apps at the same time in full screen?
Any native app will save constantly open documents and if you leave an app and reopen it, the latest status will auto resume. Which does not always work on the iPad and for sure will be sometimes frustrating on Lion. 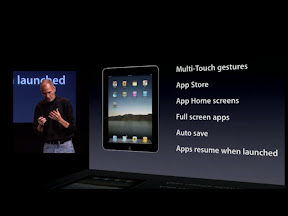 Overall Apple takes more control especially with the app store, no easy way for people to cheat anymore. With CDs you buy an app and install it as often as you want on as many machine as you wish. The app store will take full control to deny this.
The Mac OS will come much closer to iOs and pretty sure in 24 months both OS will look and work the same. A clear identification that Apple is building their own cloud with their own idea what a cloud is. Get the software from the cloud but install it on your device. I call it the Apple app cloud hybrid.

At last, Steve presented the new MacBook Air which is lighter than the old one, has as well no CD drive (which we don't need with the app store) and the starter notebook with 11 inch costs the same like the MacBook cheapest model. I believe the MacBook will disappear. Interesting is that the MacBook Air has not solid state drive it uses flash drive only.

All new things are pretty cool and interesting but not really unexpected.
Look at some statements I made a few days ago in my blog:

We can expect that iChat gets upgraded to face time. The OS will have stronger integration of Apple's social hubs like ping.

I have been off with touchscreen iMac but multi touch pad on the MacBook is pretty close to it.