Mark Z. And Steve J. had dinner together - and now?

Last week Steve Jobs and Mark Zuckerberg did meet for a dinner. Since then there were many speculations that Apple will buy Facebook.
I think the main reason was their celebration of better Facebook integration into iPhoto, a picasa photo manager on steroids. iPhoto got recently updated with iLife 11.

But the dinner could have some other topics. If we compare Steve and Mark we find a lot similarities. Both started a company very young and both skipped school to proceed their dream. Both believes they want to make a better world and scarified revenue to get closer to their dream. Apple keeps his OS only on their devices which prevent Apple to get a market share like Microsoft. Facebook did wait with their ad system a very long time to give users a cleaner interface.

Both outperformed their competition in usability which gave them big advantage and the credential to be cool. Both are extremely controlling their growth. Facebook rolled out in steps, school by school. Apple does not just develop products, they make sure they work very well before they go on the market, which gives a 12 months release cycle, in comparison the competition has a 3 to 6 months cycle.

Both needed Microsoft as an investor to help them to survive. Both are now much more growing than Microsoft. Both companies have Google as their main competitor.

Steve and Mark are eccentric and only wear certain clothes for public appearance. Mark is always wearing his zip up sweater and Steve a black sweater. Both like to control and prefer not to wear shoes in the office (when they have been young).

Both have one of the biggest crowd sourcing developer base. Apple has over 600,000 developers and FB over 1,000,000 world wide.

Both companies like the magical number 30. They both take revenue shares based on 30%.

Both could be a part of Lord of the Rings. Steve as Golem and Mark looks like a hobbit (no offense, I am such a big fan of LotR that this is a compliment).

Looking at the picture below we could almost say Mark is the lost son of Steve. 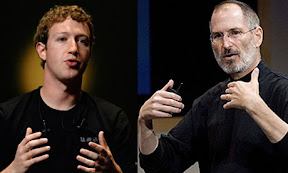 Now, Apple has enough cash to buy facebook, but I am a little doubting Mark wants to sell, or that Facebook would be a good fit for Apple.
Steve usually buys cheap companies and grow them. He is mostly interested in the technology and not reach. Facebook technology is based on open source and Steve likes to have his own closed open source system. Open to developers to use but controlled by Apple.

It is apparent that both either like each other for similarity or hate each other. There is nothing between.

Either way I believe they are going to build an alliance against Google.
Most likely that Apple will invest a billion into FB to get a few % shares and Steve Jobs might get one of the director seats in FB. Mark still has one position open he never filled.

As a return, FB gets stronger integration into iOS and both developer crowds can build easier apps which work on iOS and integrate into FB or vice versa.

Facetime could be a part of FB. 100 times more Facetime users with one switch of a button.

FB will sell some of their ads through the iAds system at Apple. FB could increase revenue without having too much ads on their platform.

Facebook has the most chaotic application pool. It is almost not possible to find apps, maybe FB will get their own app store and starts to have not only free apps but paid apps, this could boost the revenue as well.

Apple might be integrating Facebook credit in their app stores as payment method. However both don't like to give money up but at the same time to take a big piece of the pie. This would be an interesting fight.

An alliance could be strong. Apple is perfect in design and usability. FB knows social and has the biggest member base in the world. Imagine iPhones will have perfect integrated FB, what would we buy as a smart phone? Android or an iPhone? If Androids are not so perfect in FB.

Apple opens iPhone to other carriers, this and FB as native app on iPhone will instantly double sales.

I think any force against Google is good and healthy. Google is great, but I never like to have one player dominating. Competition is healthy and always best for consumer.

Let us see what we will hear from Apple and FB in the near future.

Any thoughts from you?