As i wrote last week, Twitter is starting to have advertisement on their page. Twitter will more than double their advertisers till end of the year. An advertiser has to pay up $100k for a day lockout (means exclusive advertisement).
Twitter will have three types of advertisement revenue streams.
Search results ads (as shown in screenshot which I finally could snag), banner ads in their mobile applications and ads in featured tweets. 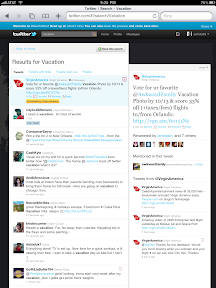 All ads are clearly defined as ads (as "promoted by XYZ")

Twitter is serious with their ad business, they went from 3 sales people to 30 and still hiring (http://twitter.com/jobs). Chicago seems to need still a few Sales people.
Coca Cola and other twitter advertisers are reporting much higher click rate from over 5% in comparison of 0.12% market average.
Twitter ads are like google ads, no money necessary for creative in the ads which keeps the production costs low.
But new Twitter webpage allows now prevue of videos and images in the text tweets which give advertisers new great platform to be creative. When you click on a tweet, you can see in the right rail the video for the embedded link. 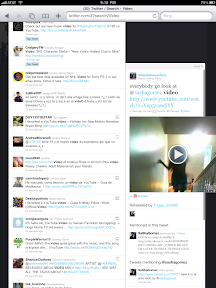 I believe the click rate is right now so high because it is new, not many ads displayed and user don't know what to expect. But even if the click rate goes down to normal it could be a good revenue stream. Twitter has over 160 million users, there must be a way to make a lot of money. Even if Twitter does only generate a revenue of $1 per user, it would be $160 million with a staff of 300 people. This is over $533K per employee which is more than Adobe does per employee (click to see source). Twitter would be in top 30% of NASDAQ companies per revenue by employee.

But Twitter must get their offline problems under control. Half of my tweets (and i don't tweet a lot) are not getting through because of technical issues at Twitter.
Twitter has nevertheless improved its uptime in the last 12 months. The site was up 99.30% (down around 61 hours) in the last 12 months, according to Web monitoring firm, Pingdom. In 2008, according to Pingdom, Twitter was down for 84 hours, worst of 15 major social networking sites. 61 hours down can cost a lot of money and confidence.
Most people might not like if they can't tweet but more important users will stop using the twitter website if the downtime does not get better.

In comparison, Facebook was up 99.85% with a much bigger and complex system.