Where is Windows in the mobile world?

Despite mounting competition from other operating systems (OSs), Apple's iOS will continue to own the majority of the worldwide media tablet through 2015, according to Gartner. Due to the success of Apple's iPad, iOS will account for 69 percent of media tablet OSs in 2011, and represent 47 percent of the media tablet market in 2015.
The new released numbers from Gartner are interesting in terms of Windows and RIM. 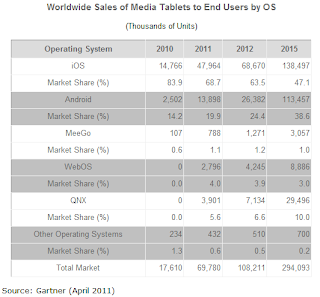 When you look at the report, then you might see that neither Microsoft nor RIM is listed. Both OS are strong in businesses. Microsoft for PCs and RIM for smart phones and email. According to other reports, more tablets will be sold than PCs in 2105 and notebooks might be totally off the radar. If Gartner is correct than more companies and consumer will use in 2015 Android or iOS.

This is hard to believe, especially that Microsoft office is still the market leader for writing, calculation, and presentation. RIM is market leader for secure mobile email and first choice in the government.

Clearly the trend is to mobile and small smart computers. Surely we will have in a few years smart phone like the Motorola Atrix which serves a phone on the road and as a computer at work.  But i cant imagine that Microsoft will not play a big role. MS will not license their office package to Apple, Google or other OS platforms. Therefore i believe the Gartner report is not accurate. It is based on OS which are now available for mobile tablets. This is surely a mistake not to consider RIM or Windows. However Gartner  has a lot of influence. And companies will make their decision on Gardner results which means it will be harder for MS and RIM to get into the mobile tablet market.

My predictions will be slightly different than from Gartner. 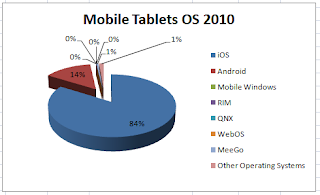 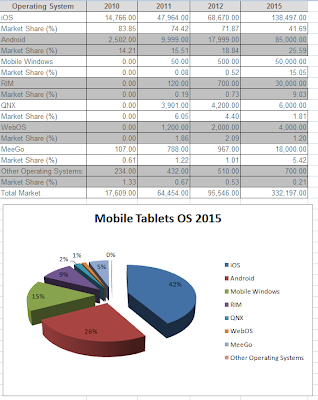 Correction:
QNX is RIM. Please count RIM and QNX together as one OS.
Posted by Markus at 7:38 AM