Ever wonder what your spouse or daughter is doing? There is the iPhone for this

Somebody forwarded me an interesting URL.

Pete Warden and Alasdair Allan, a pair of security researchers, have made a discovery about Apple Inc.'s (AAPL) popular iPhone and iPad devices. According to an in depth study they performed, Apple not only tracks its iPhone and iPad users' every move, but it stores that information in a local file. 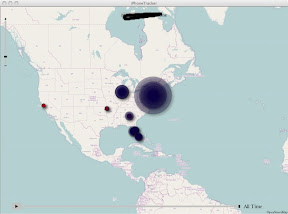 Pete Warden made his code public on his website. You can download on your Mac either the app, the source code or an HTML page to run.

Installing the app is just two clicks away. Unzip the file and run the app.
As you can see I am not a big traveller. Stored Data goes back till the first iOs 4 came out. Hitting the play button will show you your movement since then.

However some points might be off, as far as the researcher can tell, the location is determined by triangulating against the nearest cell-phone towers. This isn’t as accurate as GPS, but presumably takes less power. In some cases it can get very confused and temporarily think you’re several miles from your actual location, but these tend to be intermittent glitches.

The grey circles are showing the cell towers used to calculate your position which is in red. 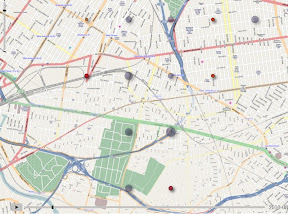 As a father or husband I could control where my family has been. You can zoom to see the actual street address. If you use their open source code, you can overlay the data over google maps to get satellite images.

To be clear, the data is (so far we know) only stored on your phone and on your computer. Nobody besides the person who has the iPhone will get the data for now.

If you don't want that anybody can access your data from your computer you should set your Apple to encrypted backup.

However, according to Mr. Warden, they were not able to find a similar file on Androids, but google might transmit the data directly to their server. The same Apple might do.

There is no agreement between the user and Apple to store this data, however the user agrees on data share when installing iTunes. If you don't agree you can't install iTunes.

iTunes Terms and Conditions:
....Apple and our partners and licensees may collect, use, and share precise location data, including the real-time geographic location of your Apple computer or device. This location data is collected anonymously in a form that does not personally identify you and is used by Apple and our partners and licensees to provide and improve location-based products and services. For example, we may share geographic location with application providers when you opt in to their location services.

For some people this goes much too far into their privacy rights, but I doubt Apple will get trouble, hence this data is not shared with anybody.

Make sure you don't take your iPhone with you, when you rob a bank. It could get expensive if the police get access to your phone.

Maybe this file is really only defined as a black box similar to the black box in an aircraft. In case you are charged for a crime the police could proof you have been at the crime scene for given day and time.

Are there other reasons for Apple to store the information locally? Sure but it is not clear for what. If they want to store it for marketing or advertisement, why not sending this data to their database?

A law might be the answer. As far I know neither Apple or any other company is allowed to store your movements in a centralized DB with your name or device number and then to share the info for advertisement.

However, if it is saved on your device then it is within the laws. Apple could extend their iAds to be able to read out your positioning file and then serve related ads to your past movements. You might get as an user to opt out for this. I know it is a stretch.

More likely that Apple planned to have an app on your device where you can see all your movement history or to include for the next iTunes version a parental control to see what our kids are doing.

Another possibility would be that Apple target this feature for companies. More and more companies moving away from blackberry.
As a CEO I might be interested to see where my employees are on a business trip.

Maybe it was something Apple did build into the iOS when they were testing new phones to see where the best reception is. This file could be helpful for statistics.
We might hear an apology that this was an accident and the person who was in charge got fired (sounds like google and the wifi info they accidentally collected).

First I thought it is cool to see where I have been since June 2010, but then I realized that it is reality that Apple could always know where i have been.

Imagine we would start to use our phone to pay instead using our credit card?

Apple would not only know where I have been, but as well how much I spend at any location in the world.

Whenever I will win in the lottery, then I would develop an app which would encrypt all location information with only two keys. The master key for all phones and then a key only the owner of the phone knows.
The app basically would disable GPS transmit and would fool the cell towers about the location (or so). I think I could get millions of people to buy my app just because of this.