Time to complain about iWork Numbers on the iPad.

It is clear that the iPad was one of the most wonderful invention in last year. A notebook so light that it makes fun to hold in your hand. A colorful ebook reader, a TV for bedtime and a great game console.

But there are a few things which are not yet good enough, especially when it comes to business.

I needed to build bar diagrams, when I started yesterday a blog about lobbying. I downloaded from a DB data as txt and opened it in Excel on my Mac. Saved the data sheet as Excel and put it on dropbox. Then I made a really bad decision. I thought I am going to use Numbers on my iPad to import the data and to create the diagrams.
First I had the issue that I was not able to create a Pivot in Numbers like i usually do in Excel when I have multiple line items and want to sum them up by a certain column. I tried to find a function like this, but was not able. It took almost an hour and countless internet searches till I found out that i need to create a table with categories.
Next issue was, that I did want to copy one field entry in 20 cells. In Excel you can just drag the cell down to give all of the selected cells same value. With Numbers I had to select the cells and then paste the value in.
I have to admit that I seldom use Numbers and therefore I am not really firm with it functions. But regardless of missing knowledge, Numbers is horrible to use with a touch screen. It took me literally 2 hours which I could have done in Excel in 5 minutes.
I think I never saw such an awful usability for a professional software.
Another frustrating part was the diagrams. I thought this should be easy. I made one table with two columns and 5 rows. The first row had the column names "Company" and "Q1 Amount" 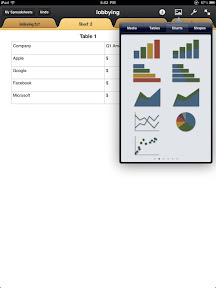 I chose the first graph and dropped it on the screen. Then I selected the table I want to use. This took already a while to figure out because in Excel it is the other way around.
Anyway the result I got was horrible. 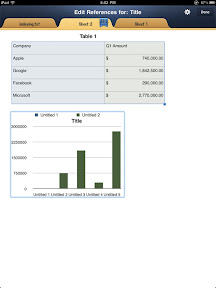 The reason is that you can't just paste a table in Numbers. You have first to create a table and then paste the values in. It is almost like building a database table.
After you created the correct table then the graphs look good. 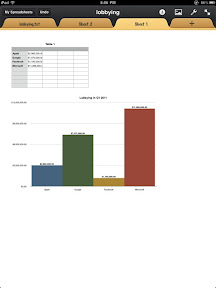 Double click on each cell allows the user to input values. 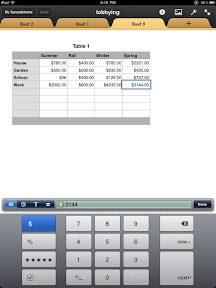 The user can input numbers, times, text or formulas. Each of them have sub categories like rating, $ or % etc. 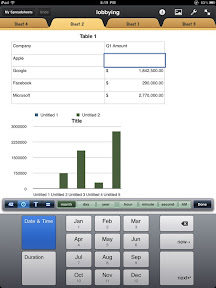 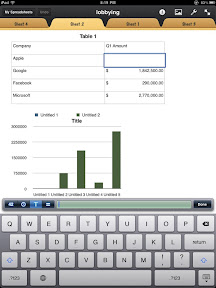 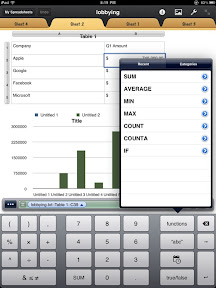 A nice function in Numbers is forms. An user can decide to create a form based on a created table. The form can the be used to capture new data for the before crested table. 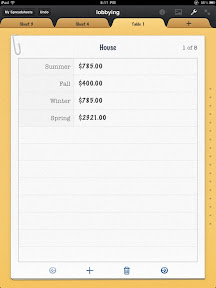 But many things in Numbers are not intuitive. It took a while to figure out to delete a row or a column or to paste a value in multiple cells instead of moving the cells.
If you open an Excel Sheet in numbers then you should magnify it otherwise it is almost not possible to select a row using your fingers.

Moving a row up or down is pretty stressful and it needs some tries. You need to select the row and the far left of the grid and then move your finger up or down. It looks like cutting the part out. 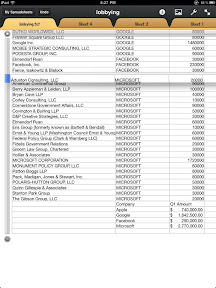 Numbers allows you to load even images into your file which can be helpful if you want to create your own graph and compare it with another graph saved as image.
Or you can overlay any kind of shapes and text on your numbers sheet. The idea is great to use numbers if you want to create a financial document, but awful to use.

The help for Numbers is very minimal, it is the best to go to YouTube and watch some helpful videos. Just search for Numbers tutorial. The best one I found was this:
http://m.youtube.com/index?desktop_uri=%2F≷=US#/watch?v=dvAC5niZoMY

There is another video from Apple which let look Numbers easy to use.
http://m.youtube.com/index?desktop_uri=%2F≷=US#/watch?v=p0aOZWKl2fM