Google, Facebook, Apple, Microsoft - they are all lobbying, is it good or bad?

I read in a recent article that Google and Facebook increased their lobbying. I never really took attention to lobbying, mainly because I was not sure what exactly it is and why it is or is not important, good or bad.
My first choice was to ask Wikipedia:
What is lobbying?
Lobbying (also Lobby) is the intention of influencing decisions made by legislators and officials in the government by individuals, other legislators, constituents, or advocacy groups. A lobbyist is a person who tries to influence legislation on behalf of a special interest or a member of a lobby. Also, governments often define and regulate organized group lobbying that has become influential.

Lobbying in the US:
The ability of individuals, groups, and corporations to lobby the government is protected by the right to petition in the First Amendment to the United States Constitution. Lobbyists use time spent with legislators to explain the goals of the organizations they represent and the obstacles elected officials face when dealing with issues, to clients.
Lobbying activities are also performed at the state level, and lobbyists try to influence legislation in the state legislatures in each of the 50 states. At the local municipal level, some lobbying activities occur with city council members and county commissioners, especially in the larger cities and more populous counties.

The basis of the idea is great. As we know politicians can't know everything and need to get consultation from experts.

However these experts are mostly lobbyist representing a large company and consult the congressman for their own interests.

This is mostly done in combination with donation or money for the campaigns.
But what happens is a lot more complex than money-buys-votes.
Consider a congressman from a district whose major employer is a large paper mill. The congressman gets donations from the paper industry, and from people who work in the paper industry. The congressman votes in ways that help the paper industry. Now, is the congressman voting that way because his vote is bought, or because he's voting the parochial interests of his district?
The congressman would most likely not vote against the lobbyist representing company.
Now in theory there is no need to donate money or to support financial a campaign, because everybody could get face time with congressmen but with who would you spend a 2 hours dinner. The person who just walks in and eventual wants that you pay, or somebody who gives you money to dine with you?

Lobbying is extremely money based and this let me believe that the system is just not right. I am not a politician, but if somebody would give me $2000 to dine with him, I am pretty sure I would not tell anybody negative about this person in the hope he is paying again $2000 for a dinner. My father always said "Money Talks" and he was damn right.

Tons of companies are specialist in lobbying to represent companies like Google, Microsoft, Exxon etc. Most of them are located in Washington.

Eric Schmidt gave his CEO position back to Larry Page to concentrate on lobbying.

I got very retested in lobbying and decided to go to the government lobbying database to get an idea how much some of the leading internet and mobile companies are spending for lobbying.
Lobbying DB

I searched for Apple, Google, Facebook and Microsoft to see how much they official spend to get their interests in front of the government. 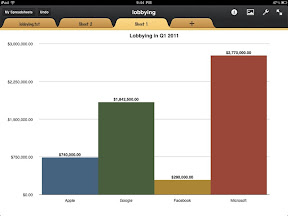 The numbers are only Q1. Below is an estimated for the whole year 2011. 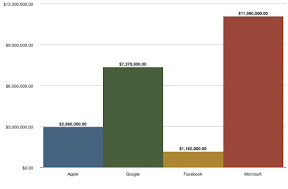 The four companies will together spend more than $22m this year and we can even expect much more in consideration that next year are the elections.

I am not an expert at all means in terms of lobbying, but I feel this is not right.
Let us take Apple as an example. They have right now like Google some privacy issue with their consumers going on, if Apple donate enough, they might not get trouble?
Or Google might have a big interest that an user can't easy opt out for targeted advertisement. Is this the reason that the congress could not yet make a consumer friendly decision. Or Microsoft, the government just recently signed a deal with Microsoft and cloud based office, maybe their money did help after all.

I can't really decide if it is bad what these companies doing or if the congressman is the problem but taking the money and eventual decide in the favor of the donation.

I am all for helping government to get a detailed picture from experts but the money part of this should not happen, it does just not taste right.

Please let me know if I have a wrong picture. I am not born in America and might not understand the system enough.

But one thing I admire here in the US, at least we keep it open and everybody can know how much companies are spending on lobbying. I like this more than saying there is no lobbying going on and secretly donating money.