New iMac eventually on sale May 3rd. What is different?

AppleInsider is reporting that Apple will release new iMac models next Tuesday, May 3. Citing "people familiar with the matter" who have "continually provided accurate information," AppleInsider states that the next iMacs will sport second-generation Intel Core i5/i7 chips and a Thunderbolt port. It could not be confirmed at this time if the new iMacs will feature changes to the display sizes.

However Apple filed a while ago a patent for a touch screen display.

The New York Times did report in August 2010 about a blog from Patently Apple. 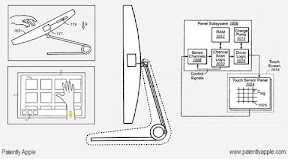 A European patent uncovered by the blog Patently Apple indicates that Apple could bring multitouch to the desktop, giving computer users the ability to touch the screen of the display in addition to the computer’s keyboard.

The patent shows a series of sensors that could be added to a standard iMac, including an accelerometer to detect the angle of the screen and in turn change the display’s resolution or orientation.

As the illustrations and accompanying descriptions indicate, swiveling the screen down to a touch-screen experience could also disable the keyboard and mouse and show a different style of operating system designed for touch.

In the touch-screen mode the patent also shows a new type of interface that looks very similar to iOS, the operating system used on the iPad, iPhone and iPod Touch.

This patent is already 3 years old but could be used with new iMacs (Transitioning Between Modes of Input, WIPO WO/2010/006210, July 2009). Apple has thousands of patents which never made to market, but this one could fit well into the new Apple line.

The only thing which does not seem right, is that Steve Jobs said that computers which touchscreen don't make sense, that it is not a natural gesture for the hands to touch a computer screen. On the other hand the patent shows that the screen can be moved horizontal for easier touch.

Normally Apple does not just release a product without a big introduction.

The source also said the early morning hours of May 3 at Apple Retail stores will be a "visual night" which means that the new iMacs should be on sale the day they are announced. "Visual night" is the term when Apple retail employees stay through the night and change merchandising and display planograms in the store in order to prepare a new product for sale. In this case, the older iMacs will be removed and replaced by the newly announced models.

AppleInsider's sources seem to agree with earlier reports from Cnet that new iMacs will ship in April or May. The iMac line was last updated on July 27, 2010.