Not all accessories for your iPad or iPhone is great

I am getting more and more frustrated. There are tons of accessories for the iPad or iPhone but some are only great if you don't buy a new device or if you don't have a case around your device.

Sure for the iPad we could use the smart cover but then only the screen is protected and nothing else. Otherwise if we buy a case for the iPad then we can't use half of the accessories. Accessories including some Apple is offering like the keyboard with docking station, or just the docking station.

Why is nobody taking in account that an iPad might be thicker with a cover? Or that the connector is further away when the iPad is in a case?

Talking with everybody I know who have iPads, are in the need to have a stand, regardless how smart the smart cover is. All want to have extra speakers and a charging device at the same time.

For speakers we could get a Sonos system which does work wireless over AirPlay, but the iPad is the still not in a stand or get charged.

But here comes the reality. If we use the smart cover we need to take it off to be able to get the iPad in any holding devices. And it gets more stressful if our iPad is in a case.

And then comes the best part. As soon Apple comes out with a new iPad the dimensions will change and we can buy again a new dock, a new loudspeaker with iPad stand and a new keyboard stand. And of course a new case for the iPad. The latter we might not be able to avoid, but the rest?

Wy is nobody, neither Apple taking in consideration that we want to protect out iPad / iPhone and that we don't want to take the protection off from the device just to be able to use certain accessories.

Why can nobody build an iPad stand with speakers which has movable parts. Where we can easily change the holders for different thickness. And why is nobody making the connector a little extendable. Just the possibility to move it 4 or 5 mm out in case that the iPad has a case?

Now we can get a stand where we can lay the iPad against, we can use a normal charging cable and the Sonos sound system, but then it looks not so good and costs as much as a new iPad.

If you still don't know what i am talking about, then look at the pictures below of accessories which are great as long you don't use a case. 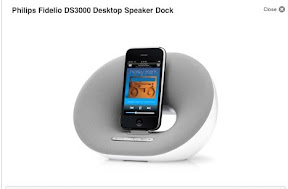 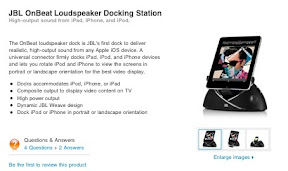 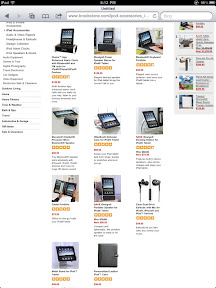 Non of the above stands are working with a iPad wrapped in a case.

I have the stand as shown below, which was great for iPad 1 besides I had to take the iPad out of the original iPad case. But now with the new iPad it does not work with or without case. This accessory got useless after just a few months. 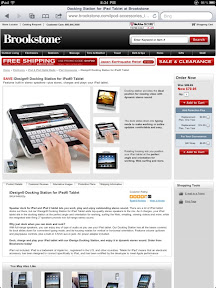 If we want throw $300 regular away, then we should buy every year a new iPhone or iPad and get the fun to buy new accessories.