Today is the big day. Apple is going to present the iPad 2. 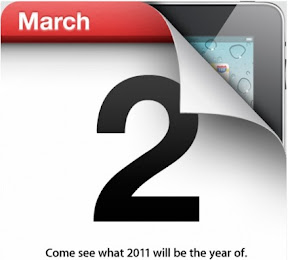 But more important and more unclear is, if Steve Jobs will make the presentation.
Jobs left Apple a few months ago at an undefined period for medical leave.
Shareholders of Apple asking since then to get a statement about Jobs health to understand if he is coming back to run Apple. Jobs was, since his returned to Apple, the driver of the company and influenced the direction of Apple very strong.
Jobs not coming back might change the future of Apple and it's stock price.
Jobs was seen in the last few months once or twice at the Apple campus and is daily on the phone with Apple executives but he did not run active the company. He attended last week a dinner with Obama. This is all we know.

If Apple would be a different company and Steve Jobs somebody else, then he would be at the presentation today to show the world all is fine.
Board of Directors would have made him to come to minimize the risk for assumptions and to keep the stock stable.

But this is Apple and Steve Jobs. He does not care what other people expect, this made him and Apple what they are today.
If he is presenting the iPad, then only because he wants and not because other want to see him.
I doubt he will present the iPad, it is not a major product release, it is not magical enough.

We will see today.