Apple is suing Amazon for its app store name. The Amazon app store is a great deal for Android users, finally a store to find easier apps. The best thing is that Amazon offers every day a paid app free. At the moment it is Angry Birds Rio.

Amazon is starting with 3800 apps for now, but the big difference to Google’s app store is that Amazon is testing all apps before they go into the store. Apple sees Amazon as a threat, which they are right.

Amazon has like Apple a lot of experience in micro payments, and even more experience with e-commerce. Amazon offers video streaming, music downloads and now apps for Androids. Soon Amazon might bring their mobile device or will offer the Kindle with Android OS.

Fighting for the app store name is just a small step but a clear identification that Apple sees Amazon as a big competition. The biggest advantage of Amazon is their cloud knowledge. They have such a advantage as one of the biggest cloud providers.

Apple knows that most of the things we own today will go into the cloud. In a few year we will not have any more big hard drives to store music and video or documents. We will store most of the not too critical data in the cloud and here is Amazon the clear leader against Apple. Google is good in cloud too, but they are concentrated to offer everything as open source which is too much destructing to be really a global player in the future. They might offer the platforms but other companies like Amazon will actually utilize it to grow their user base.

Example the app store: Google uses an open source system therefore Amazon is allowed to sell Androids apps. But the big difference is that Amazon will decide the price of the app and not just the developer and each app will be screened. The screening is missing at the Google app store, therefore a lot of apps with bad user experience or harmful for your device. Amazon goes into the apple direction, however they are only verifying that the apps are working or don’t have malware (but developers get as well 70% of revenue like Apple model). Apple goes a step further and decides if an app is not within their moral.

We all should watch out Amazon (as I wrote in an earlier post), they are clearly coming strong to the mobile market. The idea is great, take the best out of both worlds (Google and Apple) and build your own system.

The Amazon store works very well, it has categories to click through or you can search for apps. The recommendation system works perfect. I looked for First person shooter. There was no Android app for this but it offered me Xbox version of such game. And then Amazon is really good to know you and your taste and offers good software selection. Amazon was always good in this and is good with it with the app store.

Amazon has as well some exclusive apps like Angry Bird Rio for Android. You are only able to get it on Amazon. And for now as special even free, later for $0.99

But of course there are some small not perfect things like “Date first available at Amazon” and Release date.

Technology News app shows at Amazon that it was available at Amazon September 9, 2010. However the store was not open in September 2010
. 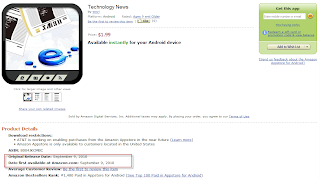 I am pretty sure that soon somebody will build an android app for Amazon apps to search for like AppShopper for the iPhone.

I only could find around 40 tablet apps and unfortunately the app store does not allow yet surfing by tablet or smart phone. I am pretty sure it will come as soon more tablet apps are available.

Nice feature would be as well to search by Android version. Not every phone does support latest Android. The description page for the apps is a little poor, it is too much same look and feel like for books.

There can be some improvements. I heard rumors that Amazon will install an Android render machine that users are able to test the games on the website before downloading and buying, this would be a great addition.
Posted by Markus at 8:28 AM