I was not in the mood to buy a new iPad 2 and to lose $400. But on the other hand I did want to have a new iPad 2 for testing and because it is new. I had to come up with a way to sell my old iPad and buy a new one without losing money.

I have been late and tried to sell my iPad at craigslist which was a disaster. I tried it twice at eBay and finally got it sold.

I used to have the iPad 64GB 3G. First I tried it as fix price for $650, but did not work out. I posted it again with no reserve and got with some extras like the original cover $570. If you have no extras you can get it still sold for $500.

Shortly after I posted the iPad, I went to the Apple store on a Tuesday at 7am. As expected already 20 people waiting. Around 8:00am there were 60 people. The Apple employees came and asked us what iPad we want. I chose 2 iPad 64GB wifi only (2 iPads is max allowed per person). 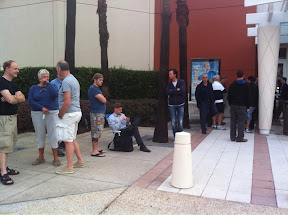 60 minutes later I had my iPads. I instantly posted them on eBay and could sold each of them to a good price. One for $850 and the other for $950.

I almost made up the difference. I had a lost of $13 which is just one breakfast at Starbucks which I will skip next week.

Please hurry if you want to try it too. The prices at eBay are falling for both the old and the new iPad because Apple shipping time went now down to 3 to 4 weeks. Every week less for shipping at Apple costs you at least $50 per iPad.

I could have made even real profit if I would have sold the iPads to Europe.

Try it out and let me know if it did work out for you.