And the Oscar goes to ABC - almost

Yesterday was the big day for Oscar and i decided to download for the iPad the Oscar application from ABC. 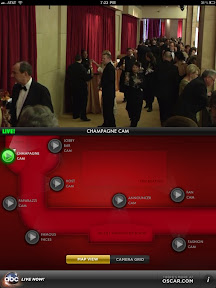 I was amazed, i really did watch the Oscar on the TV and on my iPad at the same time. The app worked impressive well. Before the show we had over days a countdown shown on the app and some video clips. Shortly before the event the app changed and we could see in the lower part the red carpet with 8 cameras. The user could switch through these cameras to see different footage. 3 of them had sound with hosts talking. When then the final event started the look of the app changed again. 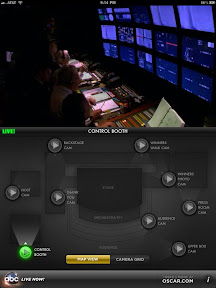 With 9 different cameras like backstage cam or control room.
ABC really made it possible to watch on two devices at the same time. When I felt bored at the TV i looked at other cameras on the iPad.
2 cameras did only broadcast when commercials were running, which was great to get coverage during commercials. 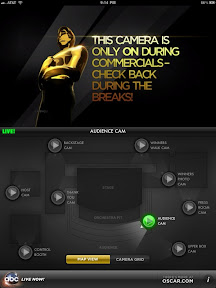 The streaming was unexpected good i had no issues, which a lot of people upfront said will be there.
ABC did a great job to keep the streaming up or only a few people did stream the Oscar ceremony.
A few things i have been missing, which might come next year.
I would like to be able to stream the Oscar through my iPad to the TV to see full size movie on the TV and on the iPad only the map to switch the cameras. I missed as well integrated twitter and Facebook for postings within the app. Twitter said there were thousands of posts during the Oscar, I am pretty sure there could have been more, if this would have been integrated in the app. The app did cost $0.99 before the event and it was a good investment. Now the app is free to see other content related to the event, in case you missed the Oscar. 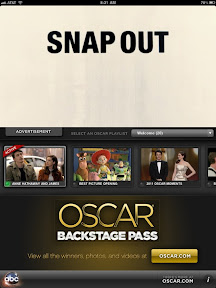 A good execution to combine mobile with TV, before, during and after the event.
If you don't have, download the Oscar backstage pass app and watch yourself some clips from the event or to see all Oscar winners. Interesting was that some winners used words which was not suitable for on air. On TV they took the sound out but on the iPad I could still hear the f words. Not sure if it was a technical mistake on the iPad, but I did like it.
The app was free of advertisement during Oscar but has now video ads which are not disturbing and clear identified.