Apple reduced the price of the original iPad by $100, as soon the iPad 2 came out.

Resellers like ATT and BestBuy are now reducing the prices of original iPads even more to get them out of their inventory. 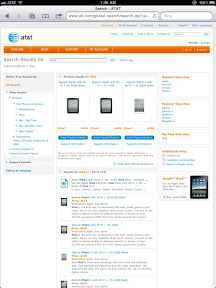 However this deal at ATT comes with a side effect. ATT is only selling the 3G versions and consumers are required to sign a two year contract with a minimum of $14.99 a month for data plan. This makes the 3G iPad $360 more expensive. When you buy it Apple you don't need to sign a contract and you can use the 3G as you go, paying month by month.

Bestbuy gives $100 off the iPad in addition to Apple discount but only as voucher, that you have to spend the money at BestBuy.

I have been yesterday at BestBuy and saw a lot of people buying the 16GB version of iPad 1. We are now able to get the smallest iPad under $300 which is in the same price range like netbooks. The people who bought the iPad yesterday at BestBuy have been lower income people who were not able before to get the iPad. When I asked them why they bought the iPad, I got two standard answers.
1. They always want to have one because they did hear a lot of it but it was too expensive.
2. My children have have friends with iPads and want to have one too, but we could not afford it.

Usually when consumers are buying new devices like phones or computers, they retire their older device. Some sell them or give them to friends but most just throw them away or don't use it anymore. They replace a phone when the two years contract is going to be renewed or after 3 years when the computer is now too old.

Different with iPads and iPhones. A lot of people buying after a year the newer version and are selling their old device or giving them to friends. Almost no iPad or iPhone does get retired.
This means basically all iPhone 3GS and iPads 1 are still in use, which gives Apple such a big advantage. Somehow they are able to convince users to get a new device every year and to keep the old devices so attractive that they are still in use till 3 years are reached.

If Apple is able to sell this year 20 million iPads, which they should be easily, then they are no doubt 35 million iPads in use end of the year.

Even if the competition can bring their tablets faster and cheaper out, I doubt that all of them combined will come close to 35 million.

The way Apple does product marketing and that their products are 3 years good, helps Apple to have at least a two year advantage to the competition.

We saw it with Smart Phones, it took two years till Android took over the market, but when we look how many people are using the Internet through smart phones then Apple is still leading. They did not sell as much iPhones as Android phone got sold last year, but as well here the old iPhones are mostly still in use and therefore we need to count them as well.

I am pretty sure shortly before we come into the third year of the iPad, Apple will invent a new category of products we don't think about yet or even think we need it, just to keep the momentum running. If not, then Apple might get in trouble to stay the biggest electronic company.