AirPlay for everyone - the Apple TV might be history

Bloomberg reported that Apple is going to license AirPlay for video streaming.
Airplay can right now stream audio to AirPlay enabled devices or can stream from your iPhone video to your Apple TV. 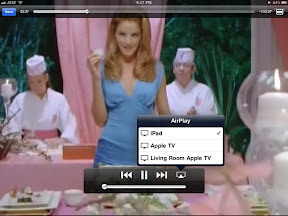 In the future it might be possible to stream video to other than Apple devices.

Airplay is very cool. I watched on my iPhone a movie, but the image was too small so I streamed to my iPad. I walked with my iPad into the living room and decided to watch it on my big TV. I just used AirPlay and the video did run on my TV.

Many times I listen to music in my office, and when I go in the backyard I use AirPlay to switch the music to our porch or even run it in the office and porch at the same time.

If Apple is licensing AirPlay for video streaming will then the Apple TV go away? Yes.

The example I had was cool, but had one big disadvantage. I did not charge my iPad a while and during watching the movie the battery went empty. And when watching movie over AirPlay you can't switch the app otherwise the movie stops. And as we all know, we like to multitask. We like to watch TV and read emails at the same time. All these might be reasons why Apple TV will not go away. We still want to use the Apple TV to stream Netflix and not our phone and then stream it to TV.

But there is a bigger problem for the Apple TV if combined with AirPlay. 50% of recent sold TVs are internet ready and many of them have apps to watch Netflix and hulu. For music they have pandora.

The main reason I have an Apple TV is that I can Netflix, watch my iTunes movies and present my Photos on a big screen.

The main point for Apple TV 2 was to get consumers more reason to buy iPhones or other Apple products. An Apple product booster which came a few years too late. I did not read or hear any big numbers of the new Apple TV sold, even that the Apple TV is so far the best TV box.
Last news i read was 1million devices sold, but this was in December 2010. If the numbers were much higher now, Apple would have announced them.
The price is so low ($99), you can not do anything wrong (Google TV $300). And it is surly not a device to make money. The manufacturing costs are $64.

Apple might see that licensing $4 per TV would produce more revenue than selling the Apple TV and will reach more consumers, which means more consumers might buy an iPhone or iPad because their TV has AirPlay.

Do I think the Apple TV will go away? yes. If my next TV has Internet and AirPlay, I would retire my Apple TV 2 for sure.