NFC (Near Field Communication) is since a while in discussion to eventually replace the credit cards. the idea is simple. An user is buying something in the store and waves his phone to pay.
Mc donalds as an example has already smart reader to allow Credit Cards with Chip to hold just in front of the reader instead of sliding it through the reader. Google is already working with some manufactures to get NFC into Android based phones. A lot of reports are floating through the Internet that apple might have NFC included into their next iPhone 5.

Unfortunately it is not so easy as we think. There multiple factors in play for NFC which might let us wait much longer on payment through NFC as we think or at least till we can throw our Credit Cards away.

First to know is how Credit Cards are working today. Which each CC payment, MasterCard or other CC companies are getting a good cut (a few $ per transaction)* and the issued bank form where you got your Credit Card will get as well a piece of the payment (around 50 cents)*. This is paid by the stores who are accepting Credit Cards. This is actually one reason why you can still many times reduce the price of an item if you say you pay cash.

With NFC it is not clear who gets the cut for each payment. The Credit Card institute and the bank want to have their part, and then of course companies like Apple who might offer the NFC plus the company who will offer the application to choose NFC.

But who has to pay it? If it is the retailer then their net will go down and therefore the profit.

The next not to forget important part is the hardware which each retailer needs to have. Just because a smart phone has a NFC chip does not mean you can pay with your smart phone. There are today only a handful retailers which have NFC ready equipment like Sears and McDonalds. Getting NFC readers into the stores. But the manufactures are ready for building NFC. A short look at Alibama.com (Chinese trading web site) shows over 162 different NFC readers priced between $30 and $400. 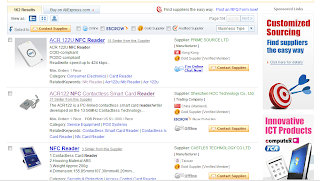 I am not sure if NFC will replace Credit Cards in the near future, even if it would be so cool not to carry 8 CC in your wallet.

But i think NFC will come fast, especially if the smart phone manufactures are including NFC chips in their phones. This helps to boost NFC.

The most interesting thing on NFC is that a retailer could utilize NFC for loyalty programs and special offers in store target and personalized to the consumer. The question is if this would be even allowed.

I remember (12 years ago), i worked for a company where we did experiments on RFIDs. The idea was that we keep the RFIDs in clothes after the consumer bought them. When they come back to the store, the retailer would know what the consumer does wear and could offer special deals around this person.

However, even if the concept was a great idea, we had to cancel our product, because it did violate the privacy of people (at least in Germany).
NFC can be seen the same, but the time changed we are now all used to be 24/7 online and to distribute our information to many. A lot of consumers are seeing privacy different than 10 years ago.


We will see a lot of start ups are coming soon which are combining NFC, Social and mobile. NFC could be the next big thing. New loyalty programs could arise on the horizon and coupons can finally go mobile.

Americans love coupons, but the big disadvantage of digital coupons is, that the consumer has still to print them. NFC readers would allow to have real mobile coupons. The consumer is just selecting the coupons and discount they like and at the cashier wave their mobile phone to get them redeemed. The issuer of the coupons can make sure that a coupon is only used once, because they would know the phones IMEI (International Mobile Equipment Identify) which is an unique identifier.

Or think about loyalty programs. You are collecting points with each purchase and if enough points are collected you can redeem them on the website. With NFC the points could be redeemed during your shopping in the Store.

Europe seems already be a step ahead in NFC.

Fidbook is offered to consumers by all four of the mobile network operators taking part in the Cityzi NFC project — Orange, Bouygues Télécom, SFR and NRJ Mobile, an MVNO part owned by the Crédit Mutuel-CIC banking group. NFC phones sold in Nice come pre-loaded with Fidbook and consumers can add loyalty cards from any participating retailer to the application, removing the need to fill their wallets with multiple plastic loyalty cards. 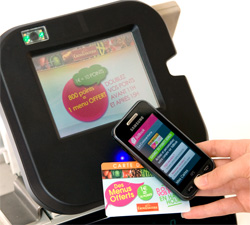 The advantage for retailers, it is hoped, is that this will then encourage consumers to sign up for far more loyalty programmes than they would previously have done, enabling even small retailers to gain a better picture of their customers' shopping habits.

Alcatel-Lucent has launched a contactless payment and loyalty points program with Sanoma Magazines to help the Belgium-based publisher gain insight into the buying habits of its non-subscription customers, according to destinationcrm.com.


In the pilot, customers use prepaid NFC stickers affixed to their mobile phones to buy Sanoma’s ‘HUMO’ and ‘Flair’ magazines by holding the mobile phone to a reader at the point of sale.

The sticker allows customers to buy 12 HUMO magazines for the price of 10, and Flair readers will be able to register online to earn loyalty points every time they use the sticker to purchase a magazine.

According to destinationcrm.com, the pilot involves about 700 HUMO and Flair customers, who can buy the magazines at seven stores equipped with contactless readers in Antwerp, Belgium. Customers can also pay for other items at the stores using the stickers.

Alcatel-Lucent supplied the contactless technology for the pilot, as well as the payment vouchers and loyalty points program. Proximity BBDO, a customer relations agency, is also participating in the pilot.

Brick and Mortar stores are losing ground against online stores since years; NFC could bring more business back to offline stores. Retailer could offer special discounts only available in the offline store received on the smart phone.

* CC fees and bank fees varies depending on total $ amount and CC card type.
Posted by Markus at 7:51 AM