New York Times announced yesterday that they are going to charge (end of march) user reading their online site. Users are allowed to read up to 20 articles free a month and up to 5 articles over search engines as not registered user. 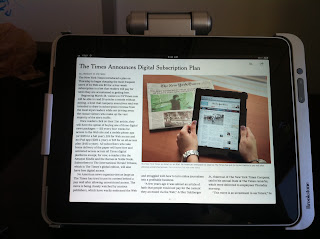 Starting in June users of the ipad app have to pay for the content as well as in line payment (30% goes to Apple). The price for NYT will be on the higher side. $15 for 4 weeks. This is 50% more than other periodicals.

I am reading every day the NYT app on my ipad, but i am not willing to pay $15 a month like many others. Shortly after the announcement NYT had over 1500 comments on their site and most of them have been not positive.

Why should i pay so much for information which is even not unique, most of the articles i read are found in similar context on other free websites. And paying for content and still get hammered with full page ads is something i don't want to do.

NYT is not the only newspaper i read electronically. There are at 5 others i read on a daily basis. If i would need to pay for all of them i would have at $100 more cots a months. I understand the paper version costs money as well. This is true and therefore i almost never bought a newspaper, i would by a monthly magazine but not a newspaper every day. But at least i can i understand costs for a paper version. There are material and distribution costs. We don't have this with online versions. NYT does not need have such high costs for online and can target ads better.

Unfortunately they are the only one charging for content, and more and more are coming. I see this clear failure of their sales force to be able to have a good advertisement concept. Different than paper versions, the ads could be much more targeted and much more interactive and educational and therefore higher recognition, clicks and conversation rates with much better statistics. This is enough to be able to charge much more for ads than on print, but for some reason they seem not be able to do this that they have to double charge the consumer. First to show ads and the not charge for content. NYT is the biggest online newspaper; i think they will lose a lot of readers. NYT says 80% of users don't read more than 20 articles a months on NYT, if this is true then because we all read everywhere and have no preferences of newspaper or it shows that we Americans don't like to read. Either way this move will not generate enough revenue to NYT but will scare away a lot of readers and therefore less ad inventory to sell. I believe this is a first step into the wrong direction.

Newspapers like NYT are helping coming like Verizon and ATT to keep their mobile prices high. I would not wonder when soon ATT announces that an user can pay $80 per month more for having unlimited Internet read access to the 20 top magazines and newspapers.

Then we are in Internet, where we are right now with TV. We pay $150 a months for 250 programs even if we watch only 20 of them, however to get all of the 20 we want we need to most expensive package.

I will say goodbye to NYT as soon i have to pay such high price. i would maybe pay $9 a month, the most. Or pay for days i want to read it.

Instead i will use RSS reader apps or google alerts to get just the content i am interested in and for free.

I don't might to pay, don't understand wrong. But then please ads free. I already don't like that I pay for private channels and must watch ads. The model might had worked for TV (even if i know more and more people cancelling their TV cable), but thus will never work (hopefully) with Internet.

Internet had so much more sources / pages to read information, that the most important things are easily accessible from other web pages. NYT has a bunch of original articles but a) the authors are not the bests and b) within hours these articles are posted in other websites.

I' am pretty sure somebody will pay for NYT and then post all the articles on a free web server.

And this is exactly the difference between internet, print, radio and TV. For all but internet it is not easy to take the content and have it almost at the same time posted or printed free for rest of us.

It never worked with internet, but now the companies are thinking we have mobile devices with apps that they can do this. To be honest, they are mistaken. We don’t install apps on our mobile devices because the app is from NYT or other famous news company. We would switch instantly to other apps to get the content free. IT is about content and not about apps. The better the content is the more we are willing to pay, but as long the content is not unique why paying when we can get almost same content free.

Goodbye NYT. Your app is not stable enough to even consider charge for content. Your app crashed regular, you need to fix this before even thinking about payment. Look at the daily. I have this app since it is out and still don't pay. Do you know why? Because the daily sucks and they know it, besides really bad content it crashes all the time, takes forever to download content. As result it is still free for me. This is the only reason why i have even the daily installed.

Goodbye NYT. Go ahead and charge for content, i leave you. Come back and ask to pay for when your quality of content goes up.

Take an example at Spiegel a German magazine. This is high quality information and i am willing to pay for it, but guess what it still costs much less than you want to charge.

Goodbye NYT, we will meet again but not as a regular reader.
Posted by Markus at 9:40 AM