Amazon is now offering free live movie streaming for their prime members. Amazon has right now over 5,000 movies for streaming, with a better selection than netflix for movies. 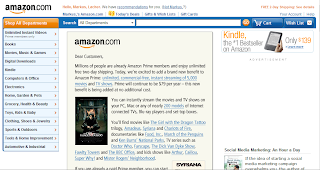 Prime members pay $79 per year, the cheapest Netflix account (for streaming only) is $96 a year.
But Amazon does not offer free rent, the average rent is $2.99. However Prime offers free shipping and some extra bonuses. Ifyou are buying at least once a month at amazon, then prime is a very good selection alone for the free shipping. 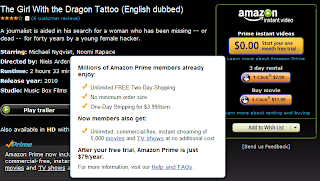 Amazon known as the big competition for eBay takes now on Netflix. Many internet connected TVs or set up boxes are working with Amazon streaming, unfortunatelly not yet the Apple TV, but rumors are talking about a September release. Amazon with one of the biggest cloud service has a faster streaming than Netflix which is nice.

People can stream these movies and shows on PCs and Macs, or through about 200 different Internet-connected TVs, set-top boxes and Blu-ray players.


Netflix's service also can be streaming through many of the same devices as well as the top-selling video game consoles, mobile phones and Apple Inc.'s popular iPad tablet computer.

Most of the movies and TV shows that Prime members can stream for free are at least several years old. Amazon has a broader catalog of about 90,000 movies and television shows that people can either rent or buy, often on the same day they become available for sale on DVD. That means Amazon customers who want to watch more recent movies and TV shows will have to pay extra to rent or buy those titles.

Netflix's streaming library also leans heavily on older material, although the company has been spending more to obtain the right to show some more movies closer to their DVD release dates. Netflix's DVD library offers more than 100,000 titles, including recently released movie
Amazon plans to add to the collection of movies and shows Prime members can watch for free, Janes said. He declined to be more specific.

This week Amazon as well announzed an Android app strore and is waiving the $99 developer member fee.
With all these changes, we should monitor Amazon more, they are certainly a key player not only Apple and Google.  It is interesting how Google and Apple are fighting in public and Amazon slowly increases their service.

The big advantage of amazon is their cloud service and their deep knowledge in eCommerce and payments.
Posted by Markus at 4:59 PM