Jailbreak your 3 Gs and keep IOS4

Tonight I thought I want to give a chance to jailbreak my iphone since I am getting my new 4S in a week. I never jailbroke this iphone only other older versions like the 2G
Used for this Pwnage. Downloaded the latest Pwnage at http://www.iphone-storage.de/PwnageTool_4.01.dmg.
Important to know I had already upgraded my iphone to iOS 4.0, which I should not have done because it is since very slow.
After I backed up my iphone I closed iTunes and started pwnage. Did follow all instructions as the tool gives you. I used the simple mode, which does install a lot of things, which let everybody easy see it is jail broken. The expert mode is better if you don’t want cydia or the pineapple start screen.
After pwnage was done it showed me how to put my phone in DFU mode (you know holding both buttons for 5 seconds then release on button for 10 seconds and so on).
As soon the phone was in DFU mode iTunes did start as expected and told me to restore my iPhone. I hit alt and control to open my custom restore done by pwnage.
Restoring did start instantly and I could see at the beginning the pineapple, which indicates, it is jail broken. Took around 10 minutes the restore and then it rebooted again with pineapple.
It did reboot a couple of times before it started to sync, which I thought the jailbreak did not work. However after 3 reboots it was done. I had ready running iPhone 3Gs with iOS 4 jail broken. I had just to restore backup.
I did not try blackrain http://blackra1n.com/ for jailbreak.
Next I went into settings – general – network and had the Set Up Internet Tethering. This was too easy, and I wondering if will have problems.
Below are two images to prove that my phone is jail broken and has iOS4 and because of this jailbreaking my phone is fast again. Not sure if this is really the reason but notable. 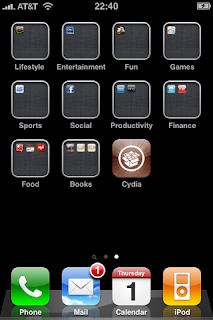 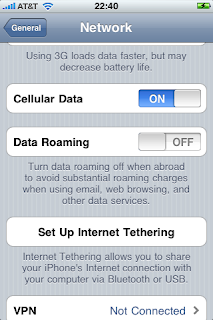