4 years ago I did work at one of the pioneers of professional crowd sourcing for software development. Topcoder.com utilizes a crowd of over 200,000 developers to build enterprise applications, websites or Mashups for companies like AOL, Fidelity etc.

Jack Hughes founded TopCoder in 2001 and brought the company to Inc 500. The biggest difference to other crowd sourcing is that everything is done in competition and only the bests will win which helps to deliver better software.

TopCoder has competitions in these areas:
Algorithms (competition length about 2 hours): Competitors are given a set (usually three) of algorithmic problems and have 75 minutes to correctly solve as many as they can.
Design (competition length 1 week): Competitors are given a set of user requirements and attempt to convert them into a usable software design specification. Their efforts are judged on a variety of "real-world" criteria on how correct and practical their design is.
Development (competition length 1 week): Competitors are given a set of design specification and attempt to write software components that match those specification. These components are judged on their functionality and coding style.
Marathon Matches (competition length 1 or 2 weeks): Contestants are given a particularly difficult algorithmic problem. The scoring is done by computer based on criteria specifically suited to the problem.
Studio (competition length varies): Contestants are asked to show off their creative skills in a competitive environment.
Architecture
Assembly TopCoder has created Assembly Competitions as an extension of Component Design and Development Competitions. Through these competitions, competitors create high quality applications using completed components and TopCoder's established competitive method.
Testing
Bug Races Project teams, clients and members are able to log bugs they find in software developed and supported by TopCoder. TopCoder will communicate these bugs to the member community. Bugs that are open to the community will be posted on the Active Bug Races page.
(source Wikipedia.com)

Many companies did follow this principle without doing a competition, but with understanding that it is easier and cheaper to let the crowd develop software instead hiring thousand of developers. Take as an example salesforce.com, the true secret behind their success is not only their very innovative CRM but their appExchange platform. Companies or single developers can offer and build new plugins or extensions for salesforce.com. Appexchange allowed SFDC to offer constantly new products around their CRM to make it more attractive without doing the development. There thousands of add ons like project management or outlook integration. 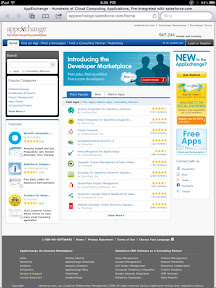 Or take Facebook as an example. Facebook would have been not half as successful without their application platform. There are uncountable FB apps the user can choose from and people on Facebook install 20 million applications every day.

Before the experts will complain, I am aware that these examples are not really crowd sourcing. Crowd sourcing origin is the act of outsourcing tasks, traditionally performed by an employee or contractor, to an undefined, large group of people or community (a "crowd"), through an open call.

For example, the public may be invited to develop a new technology, carry out a design task, refine or carry out the steps of an algorithm, or help capture, systematize or analyze large amounts of data.

However the salesforce, Facebook or Apple App store is for me a derive of crowd sourcing. They all had the task that they need to have a lot of extra features or functions to support their platform or device to attract the consumer. Therefore they did build an open API to allow others to develop new functions or apps. But to take advantage of it they did build a marketplace or one location where the consumer can find all offers around the main product. It is like accessories. We never tend to buy a computer if there are not enough accessories available.

(Finally I coming to the point) The NYTimes is now doing the same. They created beta620. 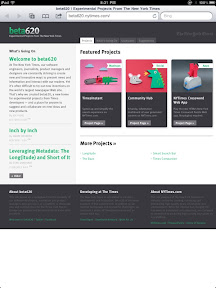 Beta620 is the NYTimes version to get the best and latest features for their website or iPad application without hiring product managers.

Beta620 welcome text:
At The New York Times, our software engineers, journalists, product managers and designers are constantly striving to create new and innovative ways to present news and information and interact with our readers. Yet it’s often difficult to try out new inventions on the world’s largest newspaper Web site. That’s why we created beta620, a new home for experimental projects from Times developers — and a place for anyone to suggest and collaborate on new ideas and products.

Many of these projects will live only on beta620. But a few, like the innovative Times Skimmer, which started out as an entry in one of our internal technology contests, will “graduate” to become full-fledged products on our main site or our mobile apps.

beta620 will also be a place where Times developers interact with readers to discuss projects, and incorporate community suggestions into their work. So, please, take a look around, and play with our new toys. We’re eager to hear what you think.

At the end it is a mix out of idea tank open to public and test platform for new products.

The whole beta620 is supported through The NYTimes developer network. Right now there are only projects on beta620 which are developed from NYT developers, however the developer network beta might merge in some point with beta620 together. 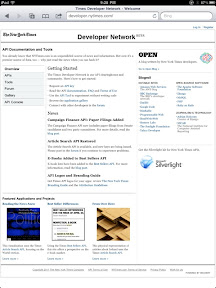 I have to say this makes sense for me. NYTimes is a very big newspaper but need to find new ways to generate revenue and to keep or gain their readers. If NYTimes will start to have their own app marketplace and people can modify their NYT experience as they wish with any function they want, then why should we need Google or Facebook?

Maybe NYT is on something, maybe they figured out that Facebook is great for keeping up with family, friends, wonna be friends and people we would like to remember why we friend them. But it is not the place to get news and celebrity info or any info we can rely on it's really important and relevant.

NYT could offer both, or be just a social network for news. But to get there, they need the long tail with their blue ocean strategy (Blue Ocean Strategy is a business strategy by creating new demand in an uncontested market space, or a "Blue Ocean", than by competing head-to-head with other suppliers for known customers in an existing industry.)

We all should keep an eye on NYTimes to see what their real strategy is.

Note:
The NYTimes app for the iPad is now 4 weeks in a row stable with no crash. The worst app OS for me now editions by AOL.