Thunderbolt and SSD or not?

An old friend on mine asked me, if he should buy the new cinema display from Apple with thunderbolt.
The answer is not easy, because he would need to have a computer with thunderbolt like the new MacBook Pro or the mini.

I asked him what he has and what he exactly wants. He has a 2009 MacBook Pro dual core and would like to connect the notebook to a 27 inch screen. He has multiple options, he could buy a 27 inch screen from any vendor, which are usually cheaper than Apple monitors but have less resolution. Apple cinema displays have 2560 by 1440 pixels and cost $999 either with or without thunderbolt. 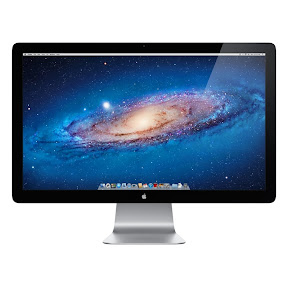 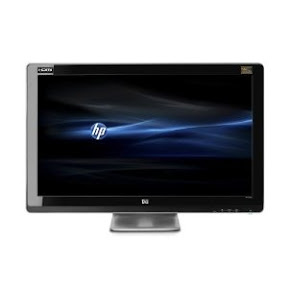 I tried one of the cheaper displays but the lower resolution is a big disadvantage. Especially if you have an iMac 27 inch and you want a second monitor.

His old MacBook Pro has no thunderbolt and, if he wants to have the new cinema display with thunderbolt, then he needs to get a new notebook. However he said his notebook is still in good shape.

I think he has other options. He could spend $1900 and buy a mac mini for $599 which has a $500GB hard drive and an i5 processor with 2GB RAM. Then he could spend another $200 for more memory and $999 for the cinema thunderbolt display and $100 for keyboard and touchpad. The mac mini does not take much room and if he has enough space for the display then he has enough for the mini. 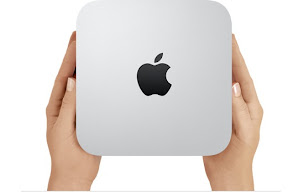 Or he could buy an iMac with 27inch screen for $1999 which has 4GB of RAM, quad core i5 and a TB hard drive. The iMac does not need more space than a cinema screen and has as well only one cable for power. 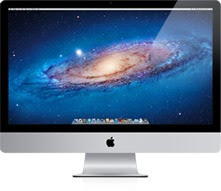 Either way both options are cheaper than buying a thunderbolt 27 inch cinema display and a new MacBook Pro.

Now there is not much difference in price but a big difference in usability.
Apple has the most beautiful computers but is lacking in docking stations. Having a notebook with external display is annoying. You need to plug the monitor cable in and eventual the power cable for the notebook. Therefore you have after time a lot of cables on your desk.

Now the really good part with Apple is, that having a second computer does not mean you need to have a second set of software. And the OS comes anyway with the computer. Most of the software bought from the app store can be installed on all af your Apple's without buying it again.

I would always recommend to have the notebook for travel or for outside. But when you are in your home office you should use the iMac.

Especially now with airdrop, it is very easy to move the data between two macs as long they are within a few feet.

And then there is another not unimportant factor. I usually have my iTunes computer running 24/7 that all my Apple TVs and other Apple devices can play my music and movies anytime. But I seldom have my McBook Pro running to avoid over heating.

Thunderbolt is the new technology and if we buy a new Apple product we should get it with thunderbolt especially because Apple is retiring firewire and other connections to promote thunderbolt. But we should ask us what we need and why before we buy two new devices like notebook and monitor. Many times an iMac will be just fine. And heck it is always cool to have more than one Apple computer.

We see more and more Apple computers with SSD (Solid state drive) which is the perfect hard drive for the new Lion functions. SSD is fast and therefore perfect for opening an app which will then open latest document we worked on.

However the SSD drives offered with the Macs are still smaller than normal hard drives and having an Apple with less than 256 GB is not desirable.
I had SSD with my Dell notebook and had to replace the SSD within 18 months twice. And then there is the rumor that SSD can not be used more than 100.000 times. This gives SSD a shorter live than an optical drive.

I tried many other external hard drives. I burnt through many. It seems that non of them can survive longer than 8 months with my iMac. The only external hard drive which never dies is the time capsule. I have two of them. One as backup for time machine and one as a data storage for my wife's notebook.

Dear friend, go and buy an iMac 27 inch and keep you MacBook Pro. Next year, when your notebook is not good enough anymore then buy a new one. And if you then still want to connect the MacBook pro to a 27 inch screen via thunderbolt then you can do this. The iMac has thunderbolt, you might then use the iMac screen (if it is possible). But i can ensure you, you will instead buy a 27 in cinema screen to connect to you iMac. Because two 27 inch screens on one computer is just too cool.