Almost two years ago I pitched to my company and some friends an idea I had and even did blog about the idea last year. The idea was kind of simple but maybe good after all. We are many times somewhere shopping for something and don't really know if we should buy it or not. We could read reviews but they are mostly written from people we don't know. Usually we get influenced by friends, we ask them and if they say it is a great pants, tool or toy we will buy. I don't know how many people I converted to iPads. But mostly they bought it not because everybody says it is a cool device, but because their friends (mostly me) told them it is cool.

Therefore I came up with the idea of "Help me Choose". An app which allows you to make a picture and then send to your friends. They can then put thumbs up or down.

Since last year there are a few apps with a similar idea. One app is called Got try it on but right now limited to clothes. The founders just secured 3 Million in funding.
Users upload a photo or use a Webcam to show an outfit and solicit advice from other users. The service, which is one of several trying to make online shopping more social, started last year, and so far 250,000 people have downloaded the app and commented on outfits 10 million times. Most of the users are young women, and 30 percent live abroad.

It is a free app and still limited. The app has yet no revenue stream but the founders are talking about similar approach as I wrote. Like letting brands pay for allowing to give better info about the product. I want to see if they as well will come up with the point system I had in mind to engage users to use the app and to vote. 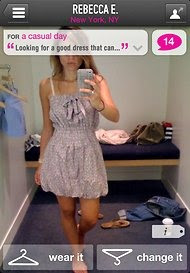 I think this is the future of social and I am mad with myself that I did not brought my idea to life.

I don't see a FB anymore necessary as a social platform it is more like tons of little social apps working independent of each other but maybe connected to FB, Google+ and twitter. Got try it on is limited to people who are member to to website and have the app. I would recommend to this company to extend it to FB, google+ and twitter. To allow to get from more "real friends" feedback. And the app should open it's niche to electronics and other retail products. Having a good revenue idea can make this app big and eventual replace reviews, which I never trusted.


Here is my blog from September last year http://www.new-kid-on-the-blog.com/2010/09/friends-are-more-important-than.html. Got Try it on started April 2010 a few months before I wrote my blog, however i has the concept already written in 2009. But clearly my fault. I did not execute and must see now how much funding i could have gotten and how many people would use the service.

Email ThisBlogThis!Share to TwitterShare to FacebookShare to Pinterest
Labels: FB, Got Try it on, help me choose, mobile, reviews, Social