Finally there is a market for tablets other than iPads

The iPad is on the market since April 2010 and already in it's second version and soon the 3rd generation will come out. Multiple other tablets from HB, RIM, Motorola and other manufactures came on the market in last year but still all other tablets together are just make 20% of the tablet market. The Apple iPad has still 80% market share. This is amazing. It seems there is no market for anything different than the iPad. But why is this? For me a tablet is a tablet, like a PC is a PC, what is the difference?
The difference is big. Non of the other tablets can yet compete with the iPad in design, weight or battery power. Some have faster processors (like Motorola Xoom) or have maybe a better OS like the HP touchpad (webOS) or higher security and business relevance (like the RIM playbook) than the iPad. Or some have cable less charging or Android OS which is on more phones than iOS. Some dan even play flash (which the iPad can't)

But non of them can offer the same package. Apple's iPad is light, has a long battery life, has a very stable OS and offers over 50,000 iPad native applications through the app store. The price starts at $499 and goes up to $829.

If would look at a matrix you would see that only the iPad offers right now all these features by being not much more expensive than the competition.

But since a few days we found the secret to get Apple from the throne. HP decided to discontinue their touchpad, after very poor sales. HP produced million of touchpad in the hope they will sell really well. And we have to admit it was not a bad tablet, there were many reviews that the webOS is actually pretty slick and working well on the touchpad. However there are not many apps yet available (btw the Facebook app is actually pretty good). The touchpad is heavier than the iPad and the battery needs to be recharged much faster than the iPad battery.

HP reduced the price for touchpad to $99 and up to $149 (bigger model). And suddenly we all went crazy to get one. I even drove instantly to BestBuy to get one. However I had no luck ,they were sold out like everybody within hours after the low price went public. 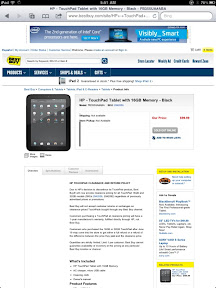 The only company which did not go as low in the price was Amazon. They sold it still for $289 which is still a discount of $200. 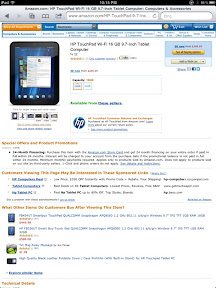 Many people bought the touchpad to sell it over eBay. 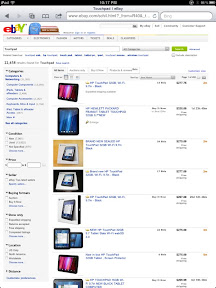 The 32GB versions goes in eBay right now in average for $300 which $150 more than the price would have been at Bestbuy.

Why is now everybody going crazy to get one? It is the price.

People don't buy the iPad because it is so much better than the others. They buy the iPad because of the package. Always a little better than the others in one or the point but not much more expensive. It is the same if you would need to choose between a Mercedes and Lexus and both would be similar models but the Mercedes would be only a few hundred $ higher. Most of the people would buy the Mercedes (if the Mercedes is overall a little better and nicer looking) and not the Lexus especially if all other choices would not be cheaper.

Many people do buy right now a tablet because they think they need one but don't really know why. At this point they prefer to buy something they know won't be wrong instead of a tablet which might be good but is not given.

Hopefully all manufactures did learn from the HP craziness. If they are smart, they are going to reduce the tablet price to around $300 for a 32 GB model and I bet the market would change very fast. The price of course would bring the margin down to 0% and unfortunately these manufactures are not in the same situation like Apple and have services they can sell through the iPad.

The only company right now who could do this is amazon, when they come out with their tablet, because they have enough services like ebooks, movies and Music service to make enough money on this to allow to have no margin on their tablet. Amazon will not succeed if they are too close with their tablet price to the Apple iPad.

Another new player in this game could be googlerola (google just recently bought Motorola). They would have the hardware competence, OS and services which would allow them to sell the tablets to 0% margin and still make money on the services offered around the tablet.

However google might only be interested in the patents from Motorola and not the hardware. And even if they are going to keep the hardware business, it would take at least 12 months till we would see an improved Googlerola tablet for the half of the price than today.

As an example netbooks only sold so well because of the low price. They were so much cheaper than an full notebook that it was a no-brainer to buy a netbook if you want to have something mobile and cheap. But then they died with the iPad because the iPad is just a little more expensive but so much more mobile and user friendly.

At the end we can see there is a market for tablets in the low price range. All this HP hypes on Facebook and twitter are showing us that tablet is the new notebook an there is a market in the lower segment and this market is big, very big. The company which will be able to get the lower income people to buy their tablets will be later the market leader.

Usually I would say the manufacture who is able to be number one seller to businesses will be the winner, but corporate world is slow in terms of tablets and it will still take 2 years till we see more tablets than notebooks in offices.