Apple goes beyond OS and hardware

It is now 4 years since Apple introduced their first iOS device, the iPhone. Not only that it was revolutionary to offer a phone with being almost the full front as screen but it did as well have no physical keyboard, not many buttons and no pen as an input device. 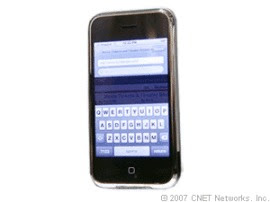 There were many critics why the iPhone will not succeed. Cnet did write up 15 reasons why the iPhone will not be a hype. Among the high price was. As well critics on the touchscreen.
11. Just how useful is the touch screen? The iPhone user interface looks elegant, innovative, and easy-to-use, but is it the best interface for a device like this?
Whenever you do anything, the iPhone will command your full visual attention. "No buttons" may be sexy, but it also means you can't do anything without looking at the phone.
The iPhone's iPod usability may suffer even worse from the touch screen. Have you ever tried to operate an iPod while it's in your pocket? You can do it, but it's hard. The iPhone will make blind iPod-surfing downright impossible.
That said, it looks like the iPhone will eliminate accidental pocket-dialing once and for all.

Every critic was wrong, the iPhone is now the most popular phone ever, it got even sold more than the RAZR from Motorola.

But much more astonishing is that the iPhone iOS multiple gesture input got copied by Android, RIM, Windows 7 mobile and all other touchscreen OS.
Pinch, wipe and zoom are just a few functions which now every touch screen device has.

It might look today obviously to wipe or to use two fingers to zoom, but before Apple nobody did seem to have this idea.

It is today such a standard that I see people trying to do this on normal monitors just to figure out they are not touch screens.

I use with my iMac the touch pad and mighty mouse and find myself many times to try to replicate the gesture movements on my Windows mouse with of course no luck.

The new way to navigate through websites or applications is so normal after just 4 years that even commercials or replicating this without anybody asking what the people in the commercial are doing.


Apple clearly does more than just computers and software, they change our thinking and behavior. The notebook might be in few years in the same situation like the typewriter and we will find notebooks only in museums.

Do you remember when Apple stopped to have 3.5 inch disks drives in their computer? At least 2 years ahead than other manufactures. Apple is a trendsetter and as long they can keep up with, as long Apple will dominate.