Google+ offers now games like Facebook. However there are not many games yet which will change soon. Unfortunately google seems to make a mistake like FB. Granted the idea is good that games messages are not showing in your normal stream as prominent as in FB, but google seem not to understand that many users are using iPads or Android slates for their daily google+ usage. 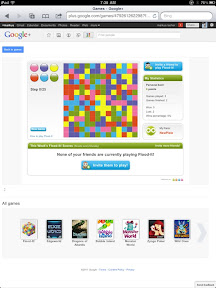 But first to new games feature. Google+ added on top one more icon for games, where the user get a list of available games. At least it is much easier to find games with google+ but only now because there are not many games. I am missing a games search. You can use the find people search to find games but a special game search would be great. Finding games at FB is not possible if you don't know for what game you are looking for, I hope google does not do same mistake.
Install is easy. Click on the game and allow the game access to your info.

But here comes the problem. If you use your iPad, you have to switch to desktop version to see the games and to be able to play the games. Here comes the next problem, some of the games are developed in flash and require flash 10 player which even Android tablets mostly don't have. 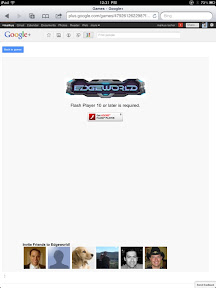 Some games are done in html5 which allows to be played on the iPad. However the iPad will always switch to mobile version when you navigate to another page. I guess google does not want you to use desktop version on your iPad.

Other games like Angry Bird are recognizing that your are using the iPad and ask you if you want to download instead the Angry Bird version for the iPad. Which is odd because I have already Angry Birds installed. Why does it not open my Angry Birds instead going to the app store? On the other hand I might want to play in google+ Angry Birds to get better ranking because there are less players playing, but I did not get the chance. And Angry Birds has no google+ connect yet to post scores etc to google plus. The games are either to play in google+ plus or are not connected at all to google+.

After all it is important to have games on google+ because most people do play games on social networks, but I was hoping that google does a better job with integration and does not allow old technologies like flash, especially that many mobile devices don't have flash or only limited flash. After all social works best on globile (smart phone) and lobile (iPads etc.). Desktops and notebook are more and more only for business use and we better don't do too much on social networks through company network and on company devices.

Google+ gets from me right now only a C+.

What do you think about google+ games, do they do it right, or should google have wait a little?