Lion OS the Vista from Apple

Do you guys remember 2006 when Microsoft released the new amazing Vista?
Windows Vista contained many changes and new features, including an updated graphical user interface and visual style dubbed Aero, a redesigned search function, multimedia tools including Windows DVD Maker, and redesigned networking, audio, print, and display sub-systems. Vista aimed to increase the level of communication between machines on a home network, using peer-to-peer technology to simplify sharing files and media between computers and devices.
And then there was under Vista an app store for windows app. 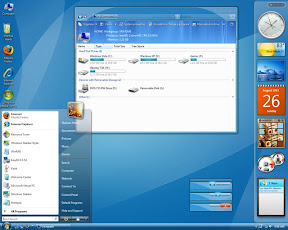 Vista promised to be the closest to Mac OSX as even possible, even better.

I installed Vista on at least 10 computers and non of them worked well with Vista. Vista had from the beginning a lot of issues, the most famous was the high usage of memory and graphic power. Maybe Vista was just ahead of it's time. The computers in 2006 not fast enough and memory to expensive.

Vista was everything but successful and in less than 3 years it got replaced with Windows 7.
5 times more people are still on XP than on Vista, and three times more are using Windows 7 instead of Vista.

Apple released Mac OS X v10.7 "Lion" on July 20, 2011. Which includes native support for the Mac App Store, and brings many other developments made in Apple's iOS, such as an easily-navigable display of installed applications, to the Mac.

Lion is the biggest released since 2001 when cheetah was released (cheetah was the first Unix based Apple OS for the consumer. In 1999, Apple released the first Mac OS X server). Since 2001 every OS update did support PowerPCs. But Lion does only support intel processors and is 64bit instead of 32bit with removed Rosetta, making it incapable of running PowerPC applications. 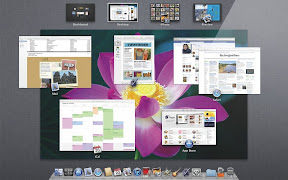 Lion has many cool changes like improved mail and document auto-save. Within only a few days Lion got multiple million times downloaded which made it the fastest ever sold PC operating software.

As cool the new OS seems, as horrible it is for many people. Many people (I am talking to) are considering to switch back to Snow Leopard.

The first hurdle is, that there is no DVD to install from, you have to download the OS from the app store. Which can take a while. It is a 4 GB download. I would have preferred a similar download like Linux, where you can download the minimum required components and then decide which components you wish to download.

A lot of people complained about the slow download, that Apple now offers to their customers to come to an apple store to either download there or to get a download version on the MAC from the friendly apple employees.

You are even now able to buy a USB stick with the OS installed for $69 at Apple. Which is more than twice as much the download ($29.99 from the app store). I guess USB sticks are expensive.

After the install are the common issues I wrote in an older blog. Flash does not work anymore because Apple decided not to send it with the OS (you have to install flash manually as a download from adobe) many Adobe products having issues and non of the PowerPc apps are working anymore and got even deleted from hard drive.

But besides from these issues, there are many more. Many have reported that their computer is here and there freezing that they have to do hard resets. Network issues and printer issues are not rare neither. And then the new OS is eating memory faster than Joe Chestnut hot dogs.

Almost everybody is complaining about the slower speed of Lion. Overall there seem more problems than positive messages. 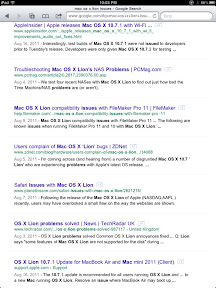 The most common problems are (found at ZDnet.com)
Random crashing that results in a totally black screen
Once the system crashes, it’s a hard reset time.
There’s no solution from Apple yet but it seems that the problem here is down to NVIDIA drivers and forcing the system to use integrated graphics only using a third-party tool (gfxCardStatus) helps alleviate the problem.
[A tipster has emailed in a possible solution - Navigate to ~/Library/Preferences/ByHost/ (hidden by default, go to it by opening the Go menu in Finder, hold down the Option key and paste the full path above in Go To Folder) and delete all files that containing "windowserver" and then reboot the Mac. This process will need to be repeated if you hook your Mac to an external monitor.]
WiFi dropping
This is annoying (I’m seeing this happen, although not often). Basically the WiFi connection drops and the only way to get it back working is to switch the WiFi adapter off and then back on again.
A temporary solution to this is to create a script that pings periodically.
Poor MacBook Pro battery life
Installing Lion causes a significant drop in battery life.
This might be related to the fact that Lion doesn’t terminate application processes immediately when applications are closed or it could be a graphics driver issue not allowing the system to switch to integrated graphics from discrete graphics (again, gfxCardStatus might be useful).
Viewing videos crash causes freezing on new iMacs
All video types appear to cause the freeze - Flash, H.264, QuickTime, AVIs, MKVs, YouTube …
This is another issue that could be related to graphics card drivers … but perhaps not.

I can support all of them. I installed Lion on a new iMac 27 inch i7 with 16GB RAM and an old MacBookPro with 2GB RAM and should not have done any of this.

I run on my iMac Parallels and it crashes all the time the computer or at least iTunes and parallels. When my time machine is running then Parallels is warning me of performance issues. I guess 16 GB RAM are not enough.

All these new cool features are worthless if the OS is not good. Lion is a great idea but maybe just one or two years to early as Vista was. It is to buggy, Apple should have wait, but I assume, Steve Jobs did push for an earlier release that he can be part of it, as long he is still CEO.

Apple released (since tiger in 2004) every two years a new OS X version. I am 100% it will be this time only 12 months. Apple should have even called Lion MacOS XI because it is almost completely new, but of course for marketing purposes it does sound better if they are still on X version. Who else can say that their OS is still the same like ten years ago.

Lion had more updates in the last 4 weeks than Leopard in 6 months, this should tell us a lot.

There are many tricks to make Lion better, like there were many for Vista, but a good OS would not need such tricks or extra small software for making the OS better.

If I would need to give Lion review stars, I would not give more than 3.5 out of 5.

But maybe it is a smart chess move from Apple. Apparently all new computers which have Lion preinstalled are working like a swiss clockwork, this means we all should sell our existing Macs and buy a new MacBook Air or iMac.