Skyfire was only available for 5 hours and was for this time supposedly #1 sold application in the app store.
The demand was and is high to get a browser which supports flash. Now the browser is not really supporting flash but when you surf with skyfire a website which has some simple flash content like flash video then the request goes through skyfire server and before it will be pushed to your browser the server will render the flash as HTML 5. This is the none technical explanation. It seems the server requests were so high that their server could not keep up. Skyfire took the application down from Apple app store, avoid more traffic which can not be handled.
When I reported yesterday that skyfire does not woke then it could be only because their servers are over capacity. I don't know.
Either way everybody who paid $3 for seeing flash content is screwed right now because it won't work till skyfire fixes the issue (if they can).
Skyfire is saying we can befriend with Facebook to get info when the app is again available.
Maybe it was just a marketing trick to get as many downloads as possible to make some good money ANC to get millions of followers. Maybe it never worked on the iPhone, but they hoped by getting 500k downloads and 5 million people being friends in facebook to collect VC and money to build the real thing (i believe it worked and it is not a marketing trick).

What I liked that i reported yesterday that skyfire is already sold out and estimated the hours how long the app was in the store and it was exactly what others today reported. 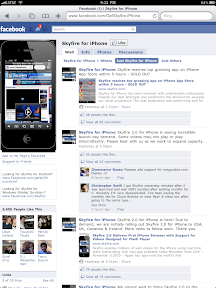 Official Press Release: (courtesy of Engadget)
Skyfire Becomes Top Grossing iPhone App in App Store and Sells Out of Inventory in Five Hours
Historic demand forces mobile browser to halt new sales and expand server capacity within hours of availability
Mountain View - Skyfire, the first iPhone browser that plays video designed for Adobe Flash Player, is announcing that they have sold out of inventory within five hours of its public launch.
Skyfire for iPhone has been received with overwhelming enthusiasm -- far beyond internal projections. The result: the company is currently sold out of its first batch of Skyfire for the iPhone and is temporarily not accepting new purchases. The company is working to increase capacity and will be accepting new purchases from the Apple App StoreSM soon.
Skyfire is assuring users that the app's sold out status was a temporary measure taken by Skyfire, and was not the decision of Apple, Inc., which has approved the app.
The app, previously available in the Apple App StoreSM for $2.99, bridges one major gap between Apple and Adobe technologies, enabling consumers to view millions of previously unavailable videos designed for Flash Player on Apple iOS devices.
The company which became the top grossing app in iTunes today ahead of popular titles like Angry Birds, experienced overwhelming consumer demand for its browser within hours of going live. The company is no stranger to consumer demand of its products as its Android browser generated over one million downloads in its first few months.
"Skyfire has historically generated high demand for its browser products but nothing like this," states Skyfire CEO Jeffrey Glueck. "It was hard to predict consumer demand since this was our first paid app, but we were blown away by the demand and sales."
The company plans to open another batch of its iPhone application in the near future. It recommends interested customers follow the company on Twitter @skyfire or on Facebook at http://www.facebook.com/GetSkyfire.iPhone for the new availability batch.