The German company Telefunken did sell as the first company their computers with a mouse in 1970. Xerox offered a mouse with their computers in 1981. But the mouse got never mainstream till Apple sold their Macintosh with mouse. A lot of people are believing that Apple did invent the mouse, but the reality is that they made the mouse famous. Three years ago Apple introduced their first phone (iPhone 2G) with touch screen. Many people think Apple invented the touch screen smart phone but i can remember that i had in 2002 a handspring Treo 180g which was a touch screen smart phone (handheld with phone) based on the palm OS. 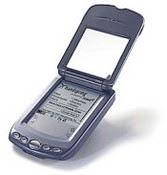 Apple had in 1983 a touch phone, but it was everything than a smart phone (if the story is true) 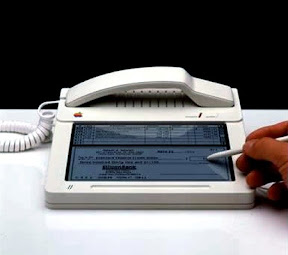 However Apple did do a good marketing and we have to admit that the iPhone is a beautiful device with a great OS and usability, even if their OS does look very similar to old Palm OS screen ( image palm tungsten)

Later on, Apple did revolutionize the mobile devices by inventing a new type of mobile device: The iPad. Bigger and lighter than netbooks, smarter than ebook readers and better to work with than phones.
But again it was not really new. Many years PC manufactures did try to sell touch devices like the iPad, the only mistake they did that they tried to have a full keyboard and a full PC OS with it. Apple was just arrogant enough to leave the keyboard out and to offer the iPad with a mobile OS instead of a full MacOsX.

We know that Apple is arrogant, but this is good. Without Apple, we might still have a floppy drive or still have CD drives (I forgot most of us have still CD or DVD drive, but not anymore longer). Apple stops to put these devices into their hardware and other will follow, because leaving a device out saves money to produce. No keyboard on phone makes a phone cheaper and less hardware problems to deal with.

Apple did a lot this decade, but the biggest yet invention comes from Microsoft. They invented the real new pointing device: The kinect.
The kinect is a device without being a device :). You install the kinect on your xbox and it will scan you and the room and uses your movements as device.
It can recognize multiple people and it is just awesome and fun to play games without holding any device. It is the Wii on steroids.

We heard how well the iPhone and how fast the iPad are selling, but the kinect as cool it is, it is selling even better (sure one reason is, it is much cheaper than the iPad)

The iPad was crowned the fastest-adopted consumer electronic device ever last month, stealing the title from the once-coveted DVD player. Records are made to be broken, though, and the Microsoft Kinect has already come out of the gate twice as fast.

25 days after its launch, Microsoft said today that it has sold 2.5 million motion-detecting Kinect devices. Granted, that includes sales over the Black Friday shopping holiday, but reviews of the device have been positive. Apple took twice as long to sell its 2 millionth iPad. These seem to be the days of the radically new interface.

And the kinect is a radical interface, hackers are working on cool things like connecting the kinect to your PC. No mouse or keyboard needed to type or point. Just using your fingers in the air.

I see the kinect just as the beginning for device less pointing and input device in the household. You want to switch the TV channel, just swipe your hand in the air from left to right.

You want to change the timer of your microwave while being in the living room. Just point your finger to your hand watch and move the finger from 3 to 6 to extend the timer by 15 minutes.

In the mood to play drums? Just get your sticks, sit on a chair and start playing air drums and your speakers will produce Dolby surround drum sounds.

The limit is the sky.