Facebook on Wednesday made a statement to become the dominant power in mobile commerce through the introduction of new developer APIs.

Speaking at a press event at the company's headquarters, CEO Mark Zuckerberg announced updated versions of the company's popular mobile application and mobile-oriented additions to the Facebook platform that aim to make it easier for developers to integrate Facebook sign-on capabilities and location data.

Over 200 million people are now using Facebook across various mobile platforms, said Zuckerberg, giving the company an audience that's bigger than the iPhone or Android user base. That's triple what it was a year ago.

Zuckerberg wants to make everything social, which is to say that he wants Facebook accounts to be the de facto authentication system, on mobile devices as well as the desktop. Certainly, there's an opportunity for Facebook to improve the mobile login experience. As Facebook's VP of mobile Eric Tseng argued, typing on a mobile keyboard or a virtual keyboard is awkward and gets worse when special characters must be entered.
With the event Facebook released a new version of their facebook app on the iPhone which makes it easier to upload images or to add places. Both is now prominent located on the top of of the page.
Which shows that facebook wants to push their places for location service. Places allows the user to indicate where the user is right now. The iPhone app 3.3 update adds Groups and Deals support. I could not find deals in the app, i assume it will be under Live Feed and then under my nearby town. 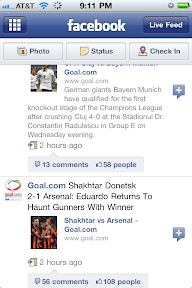 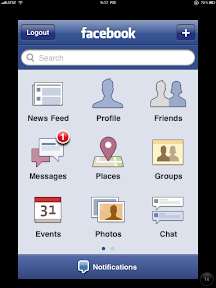 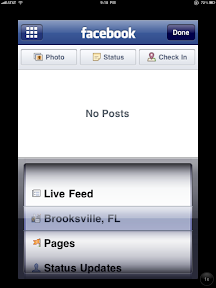 Unfortunately there is still no native iPad version available.

Seeking to improve the login experience and deliver a better user experience, the company is enabling mobile single sign-on. It's letting third-party application developers use Facebook as a login mechanism. If users are already logged into their Facebook mobile application, they can login to third-party mobile applications that use the Facebook single sign-on API without entering a name or password. This should make third-party applications more usable and make Facebook data more accessible in those applications.
Initially, single sign-on is supported in Android apps from Flixster, Groupon, Loopt, SCVNGR, Yelp and Zynga.
Single sign-on should make it to iPhone apps shortly.
Facebook is also making check-in and search functionality in its Places service available to Facebook Platform developers through the Facebook Graph API. This provides developers with access to Facebook's store of Places location data and makes it easier to add location-based functionality to mobile apps.
In addition, Facebook is enabling businesses with Place pages to offer deals to Facebook users who check-in. Businesses can easily publish Facebook Deals through their Places pages to build customer loyalty or to bring in new customers.
Deals can be a discount, free merchandise, or some other award. They can require friends to claim an offer together or can be loyalty deals for frequent patronage. They can even reward charities for every check-in.
Finally, Facebook has updated its Android app to version 1.4, which includes support for Places and Groups.