The Wall Street Journal reported the social-networking giant is on track to make $2 billion this year in profit before interest, taxes, depreciation and amortization. Using published estimates from market-research firm eMarketer, the paper said Facebook is likely to rack up $4.05 billion in ad revenue this year, more than double 2010's take of $1.86 billion.

The $4.05 billion in revenue does not tell us yet how much the value of Facebook is and how much more they can grow in terms of revenue.

Let us look into some other figures. Facebook has currently 3,000 employees. This would be $1.35 million per employee.
Apple made last year $57 billion in revenue and has about 35,000 employees which will set the revenue per employee to around $1.5 million. Therefore in terms of revenue per employee, Facebook could be compared with Apple. And Apple Valuation price-to-EBITDA is factor 10. Which would put the value of FB to $20 billion.

Another important number is the market share Facebook has today. According to comScore, Facebook has a market share of 31.2% in display ads.
Facebook served up nearly a third of the 1.11 trillion display ads delivered to US Internet users in the first three months of this year, industry tracker comScore said on Wednesday. Yahoo! websites ranked second with 112 billion impressions, followed by Microsoft, AOL, and Google in that order.


If I can count correct, Facebook would make $3.38 per CPM.
The question is how much more market share can Facebook achieve? Let us assume they can get up to 50% then their annual revenue (if ads are the only income) would be around $7.5 billion. $3.38 is already on the high side. The average for online ads was $2 in 2010.
There is not much revenue growth to expect if the CPM (cost per thousand impressions) price does not go up. I used CPM measurement because it is the easiest way even if Facebook is using CTR (Click through rate)

Second income source for Facebook are virtual goods and other things bought through Facebook credits. FB gets 30% of all FB credits used.
Some vendors estimate that U.S. revenue grew from a negligible base in 2008 to US$1.2 billion in 2009, with projections to at least double in 2010. (The worldwide market, led by Asia, is estimated at about $6 billion.)

Let us assume that 30% of virtual goods revenue will be generated by Facebook and we reach in 2011 a overall revenue of $9 billion. This would mean Facebook would get another $1 billion in revenue from virtual goods / Facebook credits.

Overall FB could make $8.5 billion in 2011 in gross revenue which would be around $4 billion EBITDA (Earnings Before Interest, Taxes, Depreciation and Amortization).
Which could get FB for IPO (initial public offering) a value of $40 billion if we use factor 10.

Is factor 10 too low, right on spot or too high?

Tim Mullaney did the work and looked into 6 companies to compare with Facebook.

Company: Google
What it does: Search engine
Valuation price-to-EBITDA*: 9
Facebook's value at that multiple: $18 billion

Company: Priceline
What it does: Online travel
Valuation price-to-EBITDA*: 22
Facebook's value at that multiple: $36 billion

Company: Netflix
What it does: Movie subscriptions
Valuation price-to-EBITDA*: 27
Facebook's value at that multiple: $54 billion

Company: Apple
What it does: Computers, smartphones
Valuation price-to-EBITDA*: 10
Facebook's value at that multiple: $20 billion

Company: Salesforce.com
What it does: Cloud computing
Valuation price-to-EBITDA*: 52
Facebook's value at that multiple: $104 billion

Of all them, Google is the most similar company to Facebook but does not require login. However Google is the biggest Internet search engine which reaches 72% market share in 2011. Valuation price-to-EBITDA would be around 9 and FB value with this multiple would be $18 billion.
Forbes:
While we anticipate Google’s search market share will expand from 68% in 2010 to ~72% by the end of our forecast period, Trefis members predict a share of 75%, implying a modest upside of 3% for our estimate of Google’s stock.

Only Apple and Google are really in the ad business or in same size of revenue per employee like FB. Apple does not do a significant revenue yet in their ad sales, but they have a micro payment system similar to FB credits (Apple app store and iTunes, both take 30% of revenue). On the other hand Google is still dominated in the lucrative market for texts ads posted with search results.

The other companies which have a higher multiple are either much smaller (less market penetration) or a B2B model. Open table is reaching less than 1% of potential customers. There is still a lot of growth possible. Netflix has 20 million users and can still ten fold in the US. If they go international even 40 fold.
Priceline has as well a lot of space to grow. FB with already 600 million users can grow, if everybody in the world uses FB, max. 10 fold. And there is not much more ad placements possible on the pages without annoying the users. The most growth FB can get is in FB credits.
Salesforce is a B2B business which has high potential. With a consumer portal, the risk is high that the users switch from one portal to another within a day especially if they don't lose money, because the service is free. A good example is myspace. 4 years ago they have been bigger than Facebook. Today myspace is not playing a significant role anymore. But salesforce is binding their clients for 3 years and switching an CRM is not easy for an enterprise company. And companies are hiring always sales people. Each new sales person gives SFDC $1,200 more a year, therefore SFDC has much higher multiple.

Not being a financial expert, I would say that FB value would be something between $18 billion and $35 billion, even if FB is traded in the second market with $70 billion. Everything higher than $35 billion estimated value for the IPO would be not recommended.
Here is a chart from Silicon Alley Insider which puts FB to $50 billion in January, which I think is too high. It is based on investments into FB to received shares, Goldman and Sachs invested into FB this year $1.5 billion based on a $50 billion value. These guys should know better than me the real value of FB which means I am much too low with my valuation. 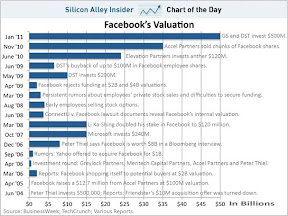