iCloud what the hack is this?

Apple purchased the domain iCloud for $4.5m And French site Consomac.fr did some digging into the latest developer preview build of OS X Lion and found something interesting. Buried in the code are references to a service named called “Castle”. Given the context of one of the mentions — “upgrade from MobileMe to Castle” — this led most to assume that the name referred to Apple’s upcoming cloud service overhaul. We can now confirm that to be the case.

And It’s no secret that Apple is building a large data center in North Carolina. Various aspects of the building process have been discussed in the local, national and tech news. The facility has even been detailed in aerial photographs. 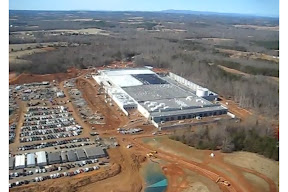 Tech reviews.net writes that there is lots of talk about iCloud, which is said to be Apple’s new cloud service. People have already speculated that it would be better than the cloud services from Microsoft, Google, and Amazon. Industry insiders argue that Apple couldn’t possibly set up a cloud for corporate clients because it lacks the know-how for such.

They say that Apple is bad at security, networking, and software. These are the important components of a cloud service. For years Apple had to fix network related bugs with their products and systems. As for security, hackers stay away from Apple desktops not because they are impregnable but they are not worth getting into. But a cloud database would be a different story, where thousands of personal data could be stolen.
Steve Jobs must also develop new software to run in his iCloud. Apple could build the hardware for the cloud service but it lacks developers to create the software to run in it. Apple doesn’t have a large enough developer base like Microsoft and doesn’t want to work with third party developers. The App Store business model might work with the consumers but it would be frown upon by cloud developers.
That means Apple would have to depend on its small pool of software developers for the job. These are the same group who can’t program an alarm clock to handle DST.
According to rumors, Apple is set to unveil the iCloud in its Worldwide Developers Conference in San Francisco next month. While loyal Apple supporters see this as another imminent win for the company, industry experts fear that Apple would be set for major failure.

But here is my take.
Apple will start the cloud different than Google, Amazon or Microsoft. The first step is to have all their apple computer users to use the cloud. First they start with music, photos and documents. When the consumer is savvy with this, the apps will be moved into the cloud. For this Apple does not need to develop applications. In matter of fact Apple has already their email, calendar and contacts in the cloud through mobile.me.
The next step is to offer iworks and iLife in the cloud, which Apple has enough developer to transform these apps into cloud service. The Apple product architecture makes it much easier to get them into the cloud. Apple has a big advantage against Google and Microsoft, they know online payment better than them. Pretty sure they come up with an usage on the go easy payment. Amazon has as well online payment deep knowledge but no real software for users. When this is done, Apple will try to attack the business world. But even if they don't, millions of consumers are producing for Apple enough revenue. Too many times did we speculate that Apple is not ready for business and this is true, but only because they did not need to attack businesses. The iPhone is already extremely common in companies and slowly but strong replacing blackberries. The iPad has no competition yet and established in many companies. All these devices will take advantage of the iCloud.
We will see Apple in the business world but we have to wait till Apple decides to attack the enterprises and then it will be big. ICloud and Castle will be the necessary bridges.


Apple is looking for database architects with noSQL experience which is a good indicator that Apple is working hard on a cloud. So if you want to work in the future for one of the top 5 cloud companies (which will be) then apply for this job. 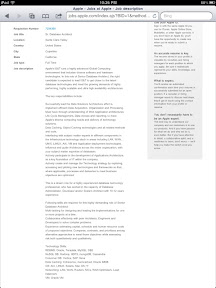