In April I talked about the Facebook problem of underage kids and one solution i offered was to create a FB just for kids.

Today I did read in cnet.com that Mark Zuckerberg is thinking exact this. 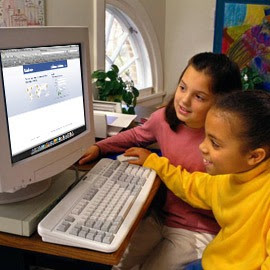 Facebook CEO Mark Zuckerberg said in an interview this week he would like to create a safe and educational social networking environment for kids younger than 13. (According to Consumer Reports, 7.5 million such American kids already use Facebook by lying about their age.)
"That will be a fight we take on at some point," Zuckerberg reportedly said of the Children's Online Privacy Protection Act, which mandates parental permission and other protections for young users. And here we thought China was Facebook's next big controversy...

I think it is smart to find a way to allow kids to use FB instead of forcing them to lie. Human beings are constantly evolving. In 1985 we had a class photo session of our 9th grad. I compared this photo with a recent photo of my nephew class. Even if the kids in both photos are the same age, there are big differences. We looked like kids, today they look much more like adults.

When I was 3, we had no TV and there was no such thing as VCR or electronic devices. The first computer I played with was with 13. My son is 3 and a master of the iPad, DVR and other electronic devices. As an example, last week his favorite Lightning McQueen flash light did stop working. He instantly knew how to open the flash light and asked me to give him new batteries. I am sure I did not know what batteries are till I was 5. He will know more about computers when he is 10 than I know today. He might build our webpages till then. One of my nephew is 20 but when he was 14 he asked me to teach him how to build websites, I bought him a good book and worked with him a few weeks on the simple idea of HTML.

My other nephew is 12 and he already knows how to build a simple website and how to make a simple flash file. But more important he knows the concept of HTML and that pages are stored on servers etc.
Of course it is easier today to build websites than when I started in early 90es, but it is evolution that we get earlier exposed to such things.

A lot changed then and today.

I am the youngest kid in our family of 5 kids. My oldest sibling is 12 years older than me and the youngest is 5 years older. What I learned at school in mathematics in the 8th grade, my sisters did not learn before 10th grade. I was good in mathematics. I had 4 courses at the university in advanced mathematics. I would say I know it well.
My sister called me once from Germany over Skype that I should help her son, who is in the 9th grade, in mathematics. I said yes, when I looked at his homework. I was blown away. He had to do stuff (just 18 after I finished) which I did not before my final year at school. And guess what I had first to read in a book before I could help him.

Back to FB, it is clear kids are much earlier exposed to technology and internet that they will try to be in FB or whatever the latest hype is.

The best thing for FB would be to create a safer FB for kids but where parents have admin control over it. This allows the kids to be a part of the latest hype but as well parents to monitor what is going on. If we forbid to be on FB then they will find anyway a way to be in and we parents would not know what is going on and this is far more dangerous. At the same time, we as parents need to talk with our kids about the danger to expose them in the wide world of Internet. We need to talk to them like adult to adult. This helps a lot, believe me.

A friend of mine, his daughter was on FB since she was 13 and guess what, she is deleted her account with 15 because it is cool not to be on FB.

Either way, we can't really stop kids to go into FB, they will find ways, but if we can educate them and can be a part, then we know at least what is going on.

Back to my little son. He is a master of the iPad, but because I allow him to play with his kids games on the iPad, he does not try to open any other application which is not intended to be for him. But the thing he likes the most (which I am proud of), is being outside and playing. Pure nature no computers.