Angry Birds Rio - not about the levels

Angry birds one of the most played smart phones apps. With over 100 million download world wide.
There are now multiple Angry Birds version like Classic, Seasons, Magic and Rio.

I have been never into Angry Birds till Rio came out and the Superball commercial with a hint. I downloaded Rio and mastered all levels for smugglers' dent and Jungle Escape within a weekend. 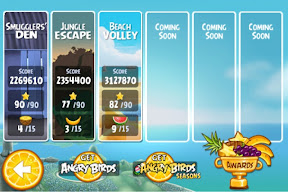 Rio seems too easy. This week came the third level out ( I had to wait a few months) - Beach Volleyball.

It took me less than 4 hours and without cheating. BTW give as much volleyballs to the dog :) 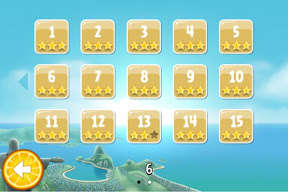 Many times i read this, but did never take advantage and i guess, because I don't want to pay for.

Sometimes, when you're playing "Angry Birds" you simply have to cheat.
Well, perhaps "cheat" is a strong word here. Let's just say that sometimes you need to bring in a little extra help from above.
Or at least, 40 percent of "Angry Birds" players do. That's how many of the game's players have opted to use the Mighty Eagle.
That is, 40 percent of players have forked over 99 cents for an in-app purchase that allows them to breeze past a level if it becomes too hard. That stat was revealed by Peter Vesterbacka, Mighty Eagle for Rovia (the company that makes "Angry Birds"), during a presentation at the Game Developer's Conference taking place in San Francisco this week.

Even if I mastered all levels it is not over yet. First of all I did not collect all pineapples, bananas and water melons. Plus I am missing 21 out of 270 stars, means I did not master the levels perfect.

And there is the ranking list. Out of 2.2 million players I am only on position 77,728.
This is within the top 4% but not within in the top 50 players. I will never reach Ahmad, but seraphyn is only 2 million points away. I am wondering how Ahmad can have over twice as much points like the other players? Is he cheating? Did he hack into it? Is he one of the game developers? A robot? There are many people asking about Ahmad, just bing for Angry birds Ahmad. 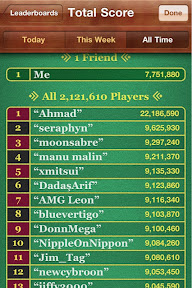 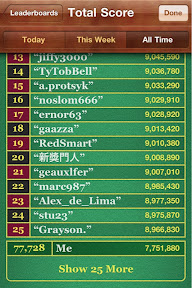 I never thought I would play for hours angry birds. A lot of people are telling me they don't like Rio and prefer the classic game. They say the monkeys are annoying. I can't say, I never played the classic game.

Rio is now as well available for Apple computers like the iMac and for play stations like PSP and Wii, but honestly the real fun on Angry Birds is that it takes advantage of touchscreen. I played it on the iMac with mouse and magic pad, but the fun is only half as much. The only good thing is the 27 inch screen and zooming out to see whole scene makes more fun than on the iPhone. Can't imagine how to use the Wii on 54 inch screen. I feel the Wii control is not good enough. The real kick comes to understand in which way you have to use the catapult how many degrees up or down etc. I usually look first at the scene and then decide how to shoot. The game uses physics of gravity. And if you have a good imagination you can easily find the best targets to get most of the monkeys etc destroyed. It takes sometimes up to 20 seconds till (after one catapult) all blocks and stones stop moving. You need patience before catapulting another bird.

The maker of Angry Birds took a simple idea to another level. The beauty is that you can restart each level any time. I caught myself to retry a level before even a bird hit a target because I saw it does not hit where I want to.

Angry Bird is sure not a game for me to spend days or months on it, but as relaxing for an hour after work is great, especially it is for me not to master a level, this is kind of easy, it is now to master each level as perfect as possible to get more points.

Different than all other games (I played before) is not only that you can play any level as often as you want, it as well keeps always track on your level high-score which adds up to total high-score. This is great, you only need to approve in one level to have a new top score for the whole game. This feature helps to bring people back.

Many other games I played before make me to start from the beginning when I was out I lifes (angry birds has no limit at all). You stop and next day you start the game wherever you want, you only needed to have the previous level finished to start the next level. This is all.

Angry Birds will eventually die in a few months. Pretty sure it is not anymore hot in 12 months, especially that this game has no ability to play against others, but the idea behind the game to have it simple and the ability to play it as often as you want at any level plus be able to get a better high score just by playing one level better than before, will be a milestone for future games.