I can't believe I did fall for Angry Birds Rio. Angry Birds is almost two years on the market and I never want to play it. I did want to use my time for something which is more useful, like writing a blog.
Bit I started a few months ago and now I played (since the latest level is out) at least an hour or two every night.

Angry Birds is kind addictive. Such a simple game with no instructions needed. But it has multiple phases.

First I started to blog about it, which was a big mistake.

Angry Birds has in my opinion 5 phases.

1. Finish it
When you start you want to finish it. As soon you mastered a level you want to master the next level.

2. Get all stars
Finishing the levels is not so hard, but you might sometimes only get one star for a level. You then want to get 3 stars for each level. I played some levels 200 times. You try one way then another way to see which one is more effective. The goal is to use as less birds as possible for a level. The hardest level for me was the last level on stage two. To get the big white bird you need to think outside the box. I was almost ready to google for help.

3. Collect the special items
Each of the 3 stages have 15 hidden items (either pineapple, banana or water melon). Sometimes you have to zoom out the screen to see a hidden banana which could be behind you. You don't need to master in this phase the levels you just want to collect the items. 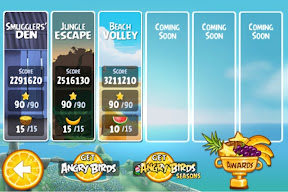 4. Extra points
Angry birds gives you extra points when you reach certain things, like a special high score or hitting a bird with another bird or watch all credits.

5. Points
This is the hardest of all phases. At this phase you want to optimize your points, you go through one level to another and try your best just to use one bird to finish the level or to destroy as much as you can, I call it "angry cleaner".

I am tight now in phase 3. But I look as well to master at the same time some of phase 4. And of course I look all the time at the high score. I am right now At 8 million points which puts me 72,382 position, which is in the top 3% of players, but not high enough :( 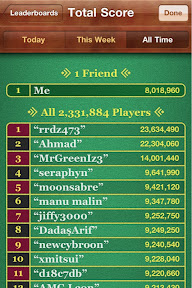 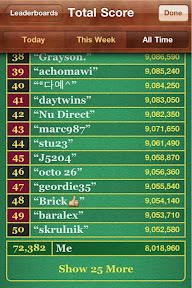 I can't wait till I mastered phase 3 and 4. Then I will be in top 200 and stop playing. It is so addictive that you sometimes play a level 200 times and restart the level as soon the first bird leaves the sling, because you know it was not a good shot.

I decently wrote less posts for my blog which is bad, I don't want to lose the momentum and I did spend too less time with my wife.


The The Landover Baptist Church Forum Mobile believes Angry Birds is even evil:

This is not why God gave us fingers!
Image


Angry Birds has over 200 million downloads and makes people to do stupid things.
firstregime.com:
Two Scottish pet shop employees were sacked yesterday after a report in the Oban Times revealed that they had been using dead birds as projectiles while playing a physical version of hit smartphone game Angry Birds. The fired employees allegedly took parakeets and mice from an industrial freezer to use as props in a lunchtime game, which Pet Island manager Sharon Renton described as "radge" - a common Scots dialect word meaning 'egregious'.


I went to YouTube after I finished my 3 stars phase. And basically people uploaded tons of Videos showing tips how to get three stars.
http://www.youtube.com/results?search_query=Angry+birds+rio+stars&aq=f

I am just happy that it is soon over for me and I will not play new upcoming levels. I need a life.