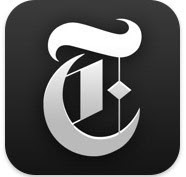 There has been a lot of trouble since the NYTimes went from editor's choice to the full iPad app.
The app did crash all the time when trying to start or loading an older article. But with the 12/28/2010 everything went better. I was close to write a blog entry how fast the app now updates new content and how stable the app is.
But since two days i can't read any article. As soon i start the app it crashes the iPad completely ad let the iPad reboot, but actually it is not a real reboot.
I see the apple logo in the middle of the screen but it takes too short for a reboot and the other apps are still open when i open the app dock.
I had to uninstall the app and install again. Which means i had to log in again with my credentials. The app did work fine for one day and then i had to do the same again.

NYtimes has to improve a lot before they can start to charge for their app.
Last year they announced that beginning of this year they will charge the user. However it did not happen yet. I guess partly of their crashing issue and partly because Apple has their own idea how the the purchase shall work. For Apple there is not a daily subscription option and the buy has to be an in app buy with revenue share of 30% to Apple.