Do you have a HDCP problem with Apple TV and Netflix?

Yesterday night i decided to watch Monk through Netflix and my Apple TV. But instead of getting Monk to run i got an error message about HDCP.

Did you ever run into the problem that you start your Apple TV and from one day to another you can't watch any of your Netflix movies, because of this or similar message:

"This content requires HDCP for playback.
Your device does not support HDCP." 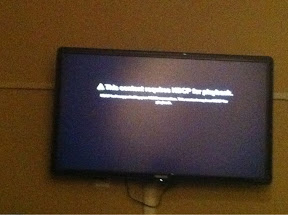 First we need to explain the meaning of HDCP: HDCP is a horrible plague visited on paying customers by movie and television studios that consider us all criminals out to steal their content. They think it stops piracy but — irony of ironies — real pirates know how to get around all types of copy protection and it’s usually only real customers who suffer from schemes like HDCP.
Basically it enforces a secure HDMI connection from content box (example: Apple TV) through intermediaries (like a receiver) to output (TV). Every link along the chain has to be secured with HDCP in order for your video to play.
This is why your Apple TV (or other video equipment) might occasionally barf up a “not HDCP compliant” warning and refuse to play the Netflix you subscribe to.

HDCP does not allow copying permitted by fair use laws. The system is meant to stop HDCP-encrypted content from being played on devices that do not support HDCP or which have been modified to copy HDCP content.[2][3] Before sending data, a transmitting device checks that the receiver is authorized to receive it. If so, the transmitter encrypts the data to prevent eavesdropping as it flows to the receiver.[4]

Manufacturers who want to make a device that supports HDCP must obtain a license from Intel subsidiary Digital Content Protection, pay an annual fee, and submit to various conditions.[5][6][7] For example, devices cannot be designed to copy content; devices must "frustrate attempts to defeat the content protection requirements";[7] high-definition digital video sources must not transmit protected content to non-HDCP receivers; and DVD-Audio content can only be played at CD-audio quality[7] by non-HDCP digital audio outputs (analog audio outputs have no quality limits).

Cryptanalysis researchers demonstrated flaws in HDCP as early as 2001, well before HDCP was deployed in any commercial product. In September 2010, an HDCP master key that can neutralize the key revocation feature of HDCP was released to the public.[8][9] Intel has confirmed that the crack is real,[10] and believes the master key was reverse engineered rather than leaked.[11] In practical terms, the impact of the crack has been described as "the digital equivalent of pointing a video camera at the TV", and of limited importance for pirates because the encryption of high-definition discs has been attacked directly, without the loss of interactive features like menus.[12] Intel threatened to sue anyone producing an unlicensed device.[11]

There are some tricks you can try to do to work around it in general, in order of severity and annoyance.

Check your HDMI cables and make sure they’re securely plugged into your Apple TV, receiver if you have one, and TV.

Turn everything off and turn it back on. Start with your Apple TV but if that’s not enough, try your TV and receiver as well if you have to.
- this helps me a all the time.

Unplug everything, wait 20 seconds, plug it back in. Again, start with the Apple TV but try TV, receiver, etc. as well if you have to.

Restore your Apple TV to factory settings. It’s amazing how many problems a clean re-install can solve.

Swap HDMI cables. You could have a bad connection between the Apple TV and the TV. Try a different cable. (Don’t get expensive big box cables, it’s digital, it works or it doesn’t work. Try MonoPrice.com for reasonable cables, you pay a tenth of best buy prices).

You’ll still have the option of taking your Apple TV to an Apple Store and maybe even swapping it out for a non-inflicted unit but start with the above.

I found all these tips at TipB, the number 1 iPhone and iPod blog.