After a hard night watching all the Super Bowl commercials (yes i only watched the commercials, not the game), i decided that the livingsocial commercial is the winner. I liked the VW beetle and the Doritos pug commercial but the best i saw was "Living Social changed my life".


The worst i saw was the groupon commercial which is a competition of livingsocial.com. Groupon had a great idea but it just did not come around. Groupon talks about Tibet and how the country is in jeopardy and at the end it shows how great the food is and how you can save money to eat Tibet food in Chicago. I just did not get the fun out of it.

Audi had a commerical with a hashtag for tweets, however it was so fast that a lot of people might have missed it.

Angry Birds' Super Bowl ad was the first to be broadcast with an embedded code.
The code will unlock a secret level in the Angry Birds game, normally inaccessible to players, according a report from Reuters.
The 30-second commercial did spotlight the upcoming Angry Birds Rio game app for smart phones and tablets, developed by game company Rovio, which is hyping the upcoming Fox animated movie "Rio."

Super Bowl commercials are all about fun and livingsocial made me laugh.

Amazing how companies are fighting for a 30 second spot and pay for this $3 Million, but it is a good investment.

According to the Retail Advertising and Marketing Association’s (RAMA) 2011 Super Bowl survey, conducted by BIGresearch, the average consumer will ramp up their spending from $52.63 to $59.33 this year, while total spending on game-related merchandise, apparel and snacks is expected to increase to $10.145 billion from $8.868 billion a year ago.

Based on the RAMA/bigResearch survey, football fans tune in for the action, with 47.0% of viewers saying the game is the most important part. However, over one-quarter (25.8%) watch for the commercials, with nearly three-quarters (74.9%) of viewers say they see the commercials as entertainment. 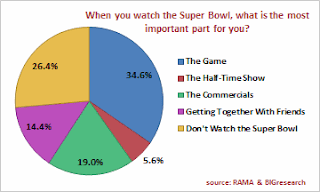 Read the Full article at RetailSails
Posted by Markus at 7:28 AM