LunaTik and iPod nano just not a good fit.

I had my iPod a long time and never problems. Last year i saw Steve Jobs saying the iPod nano 6th generation is so beautiful it could be a watch. I liked the idea and thought I should invent wristband. I searched around and saw that at kickstarter a company already had this idea too. So i decided to donate money to them to support their project. This was in October. Two weeks ago i got their LunaTik wristband for the iPod nano and the nightmare begun.
I took my iPod and attached it to the wristband. Everybody who saw the watch were amazed about the cool looking watch and did not believe me that it is an iPod nano. 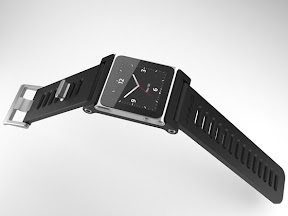 However already in the first week i figured out the watch does not stay when you listen to music. The default screen will be always the song which is playing instead of the watch. Therefore i have to scroll through multiple screens to get the watch back.
Which is pretty annoying if I just want to look at the time. The only way to solve this, is to connect the iPod to the computer and take it off from computer. It is like a small rest and the watch stays as default.
Even if music is on pause it still keeps the music as default screen, once music is played no way to change it without the step named before.

The next issue is more related to me than the wristband.
I collect watches and I have usually only water proofed watches. At the 5th day I took a shower and almost done with the shower i recognized that i was wearing the iPod nano. It was too late, the iPod was dead. Had to get another one.
I thought i learned from this, and did not wear it anymore during shower. However 3 days later same thing happened when i washed my hands, the iPod got wet, just a little but enough to kill it. This time I complained and got a replacement.
A week later i did wear the iPod nano, did not wash my hands too heavy when. Did wear and so it worked till then. We had really bad rain and guess what the iPod got wet and died again. Time for another replacement.
Another 3 days later the iPod screen got black but did still charge and did still show up in iTunes, just the screen will not come back.
I returned the iPod and took the money. No iPod nano for me anymore.

I believe the iPod nano is a nice little music player which has cool tools included like radio or pedometer, but using it as a watch on the wrist is just not a good idea. This electronic device is too fragile against sweat and water and heavy movements with your arms. It is not a device build to carry 24 hours on your arm. But not only because it is fragile but as well the battery is empty every night.

The iPod nano is a good music device for working out or to listen to music during work. But it is not usable as a time piece on your wrist. As soon you have it on your wrist as an accessory you does not take enough care of it because you totally forget you are wearing it. Different than just using the clip and have it clipped on your clothes.

Please don't buy the LunaTik or other wristbands if you think you want to use it as a watch. It will cost you a lot of nerves and money.

But if you are not scared and you want still to buy the wristband, the click here for LunaTik website.

Are there more people who had same experience like me? Please tell me about this.