For some Paris Hilton is the most beautiful woman and for some people not. But as we know every woman is beautiful and now there is a way which allows women to try jewelry on before buying it and without leaving the computer.

An E-commerce website in Australia is utilizing augmented reality (AR) for this. 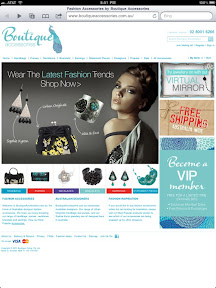 
Does it not look great? But unfortunately, even if the idea is great, the execution is poor.

First of all it is done in flash which limits the usage. Non of my mobile Apple devices can handle flash. My fault, should have a Dell Streak. 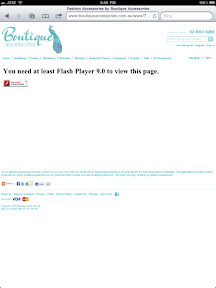 Lucky I have an iMac. Which makes anyway more fun because the screen is 27 inch and the iSight camera has a much higher resolution than the iPhone 4 or iPad2 front camera.

But neither i had luck on the iMac. My iMac has flash, and the flash did load, however the flash piece is only developed against windows computers. As described on their website it a small window pop up which asks me to allow the app to use my video camera. And this little popup does just not react on my clicks.
Next i started Parallels with Windows 7, but i did not get my iSight camera to run because I forgot to install from MacOSX DVD the bootcamp drivers, no idea where the DVD is (must be in one of my CD boxes i have in the attic). I could not get it run on any Mac neither in MacOSX or Windows. My last chance is my only Windows computer i have, which is my office notebook.

The idea of the AR is great but really poor executed. Not only does it not work with all OS and devices (70% user reach is still good enough) but the jewelry looks too unrealistic and cheap. It is already hard to show the elegance of gold and diamonds on website photo, it is harder to render it as vector.
The movement of the pieces don't follow perfect with your body movement, and even with a fast dual processor and big graphic chip it still does not go fluently.

This application has same issues like most of the AR i saw so far. It seems there are some designers and IT people developing this stuff without consulting or hiring a CGI expert from the movie industry.
They know how to do these things and they know all little tricks to make this looking great. Of course they have better equipment and the rendering is not realtime, but even with technology good enough to work via Internet, they would do a better job.

AR is the future but the future comes faster if we take more time and money to do a better job.

I am seriously thinking to start an AR company and would hire a few professional CGi guys, an doctor, a physics professor, a stylist, some designers and some good developers. This combination is required to understand and create good AR.

Let us see what comes next.

Did anybody of you see a really good execution so far?