Cheaper iPhone on the way?

New Yahoo is reporting that Apple is producing a new cheaper iPhone which will be $200 without a contract. Not sure if this makes sense. the current iPhone costs Apple $191, so they could sell for under $300 and no contract and still make money on it.
Apple most expensive components are the glass screens where they could save money, but Apple is not famous known for reducing the quality of a product design to save some money. All other components are more or less needed.
I think Apple might include in the iPod Nano a phone, which would make a lot of sense, the could sell it under $200 without contract (if the technology fits into it) and it would be still not a competition to the ipod touch. Consumer is already able to buy 3Gs iphones for $49 at ATT with a 2 year contract. Or we can buy the iPhone 4 at eBay without contract for $200.
Even if there is an iphone without contract, the carrier will ask you to sign a contract. More likely that Apple will open the iPhone 5 to all carirers in the US and the consumer can choose which they want to use. Maybe they will offer then contract free voice and data plan where the user will pay on the go.

In case Apple would produce a cheaper phone then why buying an iPod touch?

I honestly think if Apple brings a cheaper phone for the reason written in the article, then it will be a totally different form factor than the iPhone 4 and it will be still high quality in design and material. There is no Apple product on the market which has not a specific Apple signature in design and material. There is no reason at all to change this just to keep up with Android. Apple is not just an OS, it is hardware and software bundle, and there is no other phone sold so much like Apple iPhone. 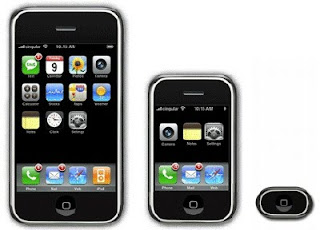 I have the iPod Nano and only three things i am missing. Bluetooth (for my headset), Apps to download (to play some cute games on it) and the ability to make phone calls. I am wearing the iPod Nano on a wristband which would be great as a phone.
Posted by Markus at 2:10 PM