WWDC keynote - a big attack against Facebook, Google and Microsoft

Today was Apple's yearly keynote and bedside what we already knew what will come some was unexpected. Steve Jobs lost more weight (I feel so sorry for him). He looked at least 10 pounds lighter than the last time. 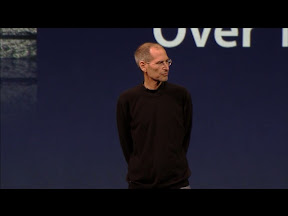 Apple did clearly make the point that they are Microsoft, Facebook, Google and Amazon together and better. The attack wen to all of them.

The keynote was about Lion OS, iOS and iCloud. Exactly as we heard before.
But here a few interesting points. Steve talked many times about PC when talking about Macs. In the past everybody referred to Windows computers as PCs and Apple computers to Mac. In the keynote he talked many times about PC, because Apple is now so big that it is not just anymore a small company for desktops and notebooks. There are now over 55 million Macs on the market. Which makes Apple third biggest PC manufacture.
Lion will have over 200 new features, the most i liked is mission control. 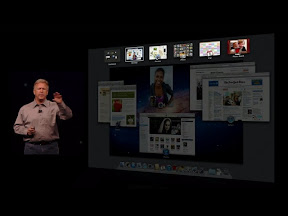 A great feature to find and navigate through all your open apps and windows. Lion will be much closer in look and feel to iOS and supports better multi gestures. However in the demos we could see that it was not easy to use. But it is a step closer touch notebooks and touch screen desktops. Lion will be only available over the app store as download for just $29.95. This is great. And I only need to buy it once and can install it on all my Macs.

iOS:
iOS 5 will have over 250 new features and 1500 new APIs great for developers and users. 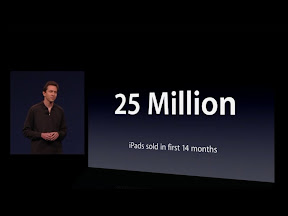 Apple sold over 25 million iPads in 14 months but more impressive is the total amount of iOS users: 200 million.
One of the new features in iOS is a better safari with tab browsing, twitter is build info the OS, there is a new overhauled mail program and finally a new way of notification. No disturbing alert boxes any more. Last but not least the game center gets more social aspects which has already today 50 million users, almost twice as big as Xbox live (Hello Microsoft). 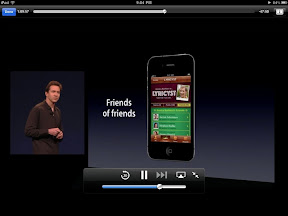 The new iOS is an attack against Facebook and other social networks. iOS is now second biggest social platform. To make iOS a social platform users will be able to send and receive messages via iMessages through all iOS devices over 3G or Wifi regardless if it is a phone, a music player or an iPad.
Apple will even offer this features to Macs and PCs. Who needs in the future Facebook. The two big things in Facebook are games and status updates. All this will be soon possible through iOS devices and apple social platform. Apple even allows with iOS 5 to buy one app one time and to be installed on all iOS or Mac devices the user owns. I might need to ask Apple if I get my money back for pages and keynote which I bought multiple times.
The best part, iOS makes your phone cable free, we will be able to sync over the air, which will help to get more buyers because they don't need to have a
PC or Mac to sync or activate their device.
And if you think to buy a new camera, think again. iPhone is already number one device in uploading photos to flickr. Now it gets easier. The camera can be accessed through home screen and the sound button can be used as shutter. Hopefully this will speed the app. Today starting the photo app will take sometimes 10 seconds. To long to make an action shot.

The last part in the keynote was iCloud. First of all, I love it, because I will save $149 a year not using mobile.me anymore (family account). Today I got an email that my mobile.me will be free till it goes out of business (June 2012). 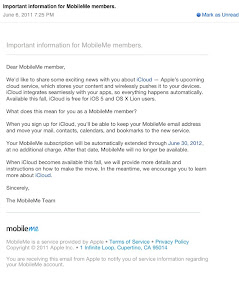 With iCloud all my calendars, mails and contacts will be synced to all my devices instantly. I hope it will work, because with mobile.me it did not go well and I had all the times sync issues and at the end some calendar entries 20 times repeated or contacts 10 times in my contact list. Even Steve said that mobile.me was far from good.
But iCloud has much more. Free documents sharing between your devices and friends (mo need for dropbox anymore). It works from the beginning with pages, keynote and numbers, however the API will e available for developers to put other documents types into the cloud directly out of the apps. Google doc sounds very familiar but Apple makes it easier no upload necessary all can go directly through the apps.
ICloud is up to 5GB free (Photo streaming and mail does not count, they a free anyway) this a pretty good deal. Yeah finally I don't need to email images I made with my iPhone to my iPad that I can use them in my blog. They are just synced to all devices if I wish. Up to 1,000 photos on iO
S and unlimited on PC and Mac. Photos will stay 30 days in the iCloud enough time to sync the photos.

And of course Steve had to say it. "one more thing".
ICloud does not only put your documents, photos and calendar in the cloud, it allows you to put your songs there as well. But instead of uploading the songs, iTunes will have your music you bought in iTunes automatically in the cloud and will be available on all your devices.

But what was the one more thing? Exactly what I was wondering in my older blogs. As an example I have collected over the last 20 years over 20,000 songs and I bought only 100 in iTunes. For only $24.95 a year, I can have all my songs in the cloud. It does not matter if I have 5,000 or 200,000. If I want, ITunes can scan my library and will make all my songs available in the cloud. I only need to upload the songs Apple does not have. They say they have over 18 million songs, and they 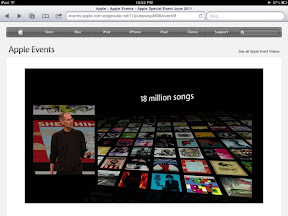 believe most of our songs will be already in iCloud. This means syncing an iTunes library takes the most a few hours not weeks like with amazon or google. 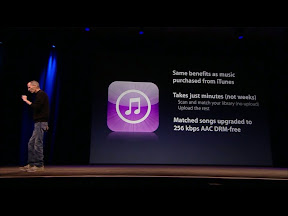 Both services require that we need to upload our songs to their cloud because they don't have yet agreements with the big labels. 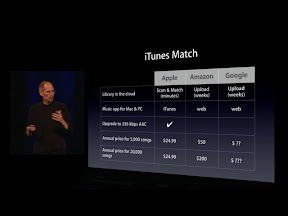 Over all the keynote was interesting and when reading between the lines we could read that Apple is going away from Software company. Apple is a platform which delivers the OS, the hardware and the service.

So far all major changes did work out for Apple. Ping, Apple TV and mobile.me maybe not, but this new redefining of Apple might work very well.

I guess Steve sees it like Jack Welch once said. It is harder to stay number one than to get to number one, therefore we should always redefine our competition when we are number one to be not anymore number one.

Steve looked sicker than ever and had problems to walk, I hope he sill be soon better. Regardless if I like him as a person or not (I even don't know him), he deserves to be healthy and he did something with Apple which nobody had thought about 15 years ago.