I don't know if anybody did notice, but all your iOS devices have a new function. When you go to settings and then click on store Icon you have three options. 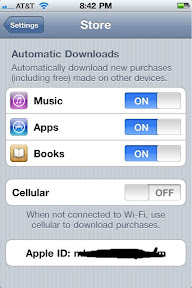 The interesting part is that this function addition seems to be done over air not with an update of the iOS through iTunes. At least I did never saw it before June 3rd.

When you switch music, apps and books on then a nice thing happens, your device will get new app installed even if you bought it on another device.

I recently bought Atari games for my iPad. And when I came home the app was already installed on my iPhone.

Steve Jobs talked about this feature being a part of iOS 5. This means you don't need to buy an app anymore for multiple devices. The Atari app has in app buying function and even this worked. I bought with the iPad games within the app and when I started the iPhone app it asked me if I want to restore these games for no extra charge. 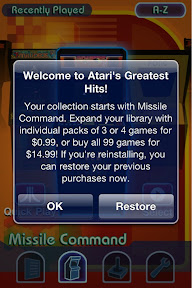 You can see all purchased apps which are not yet on your device, when you go into your app store on your iOS device. 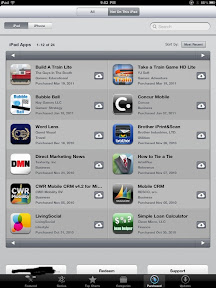 Interesting is the feature for apps like NYTimes. They charge you for each device extra (in app purchase). Unfortunately with NYTimes you have still to pay extra, but maybe not for long anymore because this is against Apple's agreement.

Unfortunately the automatic download does not work yet with the app store on MacOsX, these apps are still separated from the iOS apps.

It might be that this function is a long time available, but all friends I asked did bot know about it.

I don't know if Apple is just testing this function or if they introduce us to iCloud step by step like the recent update for iTunes. Either way I like it. This will save us money. Why to pay for an app three times only because I have two iPhones and an iPad.