This week our Pope opened his twitter account and did his first tweet in front of a camera. He needed some help to understand how twitter works. Besides that the Vatican goes aggressive to social and online, there was another interesting part. The pope did use an iPad to tweet. What better advertisement could Apple get.

There are 1.166 billion Roman Catholic members if only 10% are now going to buy the iPad (because it might be holy) then Apple would sell another 100 million iPads.

Maybe Apple will sell an iPad which has the bible already downloaded in the iBooks store.

If not then you can download the Gutenberg version free at the iBooks store. 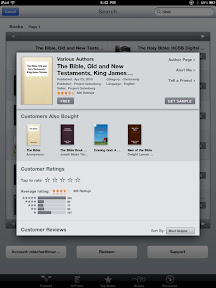