Steve Jobs will open the keynote on Monday at the WWDC. Unlike like usual we already heard what it will be about. But we should not be so certain. Usually Apple keeps their topics as secret but not this time, or maybe there is still a secret. 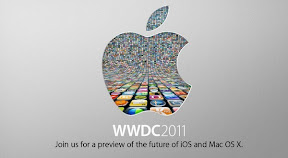 The invite does indicate that iOS and Mac OS X will merge closer together.

That Steve Jobs is doing the keynote is a good indicator that something big will be shown. Steve is not working active because of his cancer and did not attend a few keynotes, because of this reason. He only comes to the stage when he believes he can give it more importance and bigger hype when he does the keynote. The keynote is mostly around the new OSX Lion, but we already heard that he will talk as well about iCloud. Apple's cloud music service or more. I cant wait to hear if iCloud might replace MobileMe. My subscription is ending end of June. I have a family account for $149 and would be happy to replace it with something more affordable. However Apple is a hardware and service company. I don't think I would get my service cheaper, but for sure more out of it. ICloud might be free with Lion OSX and/or starting as cheap as $30 a year.
Even if Apple has some software and two OS, I don't think I can define Apple as a software company. Apple will offer software cheap or free to support their services and to run their hardware. Software is just a necessity for Apple. Nothing they will make big money with it ($2 billion is mot much for Apple, which is now bigger than Microsoft and Intel together).
A lot of people are speculating that this time no new hardware will be presented. But maybe we get a sneak preview of the new upcoming iPhone or airport (airport could get iOS and could serve as your device to VPN with iPad perfectly with all your other Macs)

I am still not convinced we know everything which will come.

The best speculation I read was at the PcMac.com website (see below)
A few things I might not agree. Steve Jobs said many times a vertical screen is not build to be a touchscreen. But maybe Apple introduce a new iMac which the screen can be flipped to be horizontal like a patent Apple filed a while ago.
Or maybe we see Apple's entrance into fitness. Apple filed a few months ago for a patent using NFC for fitness centers. As soon you are on a workout machine your phone will recognize it and store important data or plays certain music to your workout.
It is really funny how much everybody (including me) is speculating about the keynote, nobody believes we know already what will be said. I am sure I am watching the keynote.


OS X Lion
Apple may give away parts of iCloud for free with its new Lion OS, Apple Insider's Hughes reports, citing unnamed sources.
"People familiar with Apple's plans indicated to AppleInsider that at least one of those secrets is expected to be that at least some of the services included in iCloud will be offered for free to Mac users who make the upgrade to Lion," he writes.
What's more, Lion itself could be pretty aggressively priced. Apple only charged $29 for Snow Leopard when it released its last major update to OS X, and Hughes reports that one source—albeit one with "an unproven track record"—claims Apple's planning to do the same for Lion.
"Whether Apple will choose to go with the same sub-$30 pricing of Snow Leopard when Lion goes on sale is unknown. But software now plays a very small part in Apple's bottom line, and the company is said to be interested in ensuring that users quickly upgrade to the latest version of Mac OS X, through incentives and low barriers to entry," he writes.
Going forward, "Apple will announce that by early 2012 every screen they make will be touch-enabled, including the entire Mac line," prophesies veteran Apple developer Kevin Fox on his fox@fury blog.
"While it will be several years before OS X apps require touch, there will be universal gestures that will be useful in today's apps from day one, and more gestures that tomorrow's apps can choose to support to augment the pointer-and-keyboard model.
iCloud
Apple's iCloud venture could mark the beginning of the end of the personal computer as a major product line for the company, argues Brian Caulfield of Forbes.
"Far from being an offering that's a 'nice add-on,' to Apple's business, iCloud seems poised to replace the PC as the hub in Apple's 'digital hub,'" Caulfield writes.
Going forward, how much cash will Apple haul in with iCloud? Given reports that Apple will charge $25 a pop for the service (unless they give it away for free as per AppleInsider?) and sell ads around it as well, ZDNet's Larry Dignan calculates that the company could make $1.2 billion in iCloud revenue in a calendar year.
"That's not a huge deal for a company the size of Apple, but it's not chump change either," writes Dignan, who reached his revenue projection by assuming that a third of new iPod owners and half of new iPhone and iPad owners will sign up for iCloud.
But is $25 the right price? Apple Insider's Hughes indicates that the $99 Apple charges for its perhaps-soon-to-scuttled MobileMe service may be what the company charges for iCloud as well.
So will iCloud really be all that Apple is touting it as?
"My guess is that iCloud is to MobileMe as iPhone was to Newton: a complete, deep, polished solution after an underwhelming market failure," Fox writes on fox@fury.
Security
Ars Technica's Jacqui Cheng thinks Apple's recent actions to defend Mac users from the MacDefender scareware attacks of recent weeks could signal that Apple will "be taking a more aggressive approach to integrating malware detection in Mac OS X."
It had better, says PCMag's John Dvorak, because MacDefender is a sign that "the Apple Macintosh is now subject to the same sort of abuse that the PC has endured and survived over the years."
iOS Devices
Fox has a ton to say about what he's hoping Apple will do for its iPhone, iPad, and iPod devices. A lot has to do with building bridges between Macs and iOS devices. Here's a sample of what he's looking for at WWDC:
- Realtime, continuous syncing of iOS devices will mean never having to plug your iPhone or iPad in to your computer again, or even the need for a computer for syncing at all.
- Built-in screen sharing of Mac OS to the iPad, to do lightweight actions on your Mac from your iPad.
- iOS runtime within Mac OS to allow iPhone apps to run as Dashboard widgets and iPad apps as first-class desktop apps.
- Task-level integration between iOS and Mac OS. If you have a spreadsheet open in Numbers on your Mac and you open Numbers on your iPad, the document you were working on will open up. Real-time synchronization will be integrated as an OS-level service available to developers.
- Unification of the App Store to encompass Mac, iPhone, iPod, AppleTV and iPad apps. Ability to make a single purchase for all the environments the app supports.
- Stripping out the App store from iTunes. iTunes will be the media storefront and the App Store will be the resource storefront.
- The only new devices announced at WWDC will be updates to facilitate the new software functionality. Some have speculated on new AirPort base stations built around iOS to make VPN easy and mainstream. This seems very likely. It will be important to have one device that is always on and available, and AirPort is a sensible bet.
- AppleTV + App Store updates probably aren't there yet, but I wouldn't be surprised to hear announcements in order to get developers building apps.