Everybody is talking right now about NFC (near communication frequency) and surely we are going to see more NFC applications. However the question is how useful NFC is. We need to know that optimal NFC radius is 4cm (max 20 cm). NFC requires an initiator and a target. The target can be passive like RFID which gets it's power from the magnet field of the initiator or can be active being an initiator as well. The latter one allows more distance between the devices and better communication in both direction. NFC is many times compared with bluetooth however the data frequency is much lower for NFC and the transmitting radius today much shorter, however NFC needs much less power and there is no need to pair the devices like we need to do with Bluetooth. We might see a combination of Bluetooth and NFC. You take your headset, hold it against the phone. It is then automatically paired.

We already know that in Europe NFC is very common for payments in public transportation or credit card payments.


America is not ready yet but Google and other companies are working hard to get NFC running. The next Google and RIM phone will have NFC embedded. As well it is to expect that Microsoft and Apple phones will have NFC. The question is for what NFC can be good besides payment. Given the short transmit radius there are not many applications for NFC. But NFC can replace car keys, house keys, security cards or computer passwords.

However NFC is easier to hack but of course the attack needs to be done so close to the device that you would literally look the attacker into the eyes.

Because NFC devices usually include ISO/IEC 14443 protocols, the relay attacks described are also feasible on NFC. For this attack the adversary has to forward the request of the reader to the victim and relay back its answer to the reader in real time, in order to carry out a task pretending to be the owner of the victim’s smart card.

If the electronically wallet from Google gets main stream, then pocket thieves will get a new definition. It is not anymore necessary to steal somebodies wallet out of the pocket.

I read a lot things that NFC would be good for museums. You see an art, you touch a smart paper and you would see info to the art on your mobile device. This is not a practical idea. Imagine hundred people want to touch same spot at the same time.

Another approach is Apple testing. They are working on a patent for privacy security via infrared. Interesting is that Apple iPhone does not have infrared. They have been the first not to use it anymore on their devices.
Now the patent they filed talks about infrared sensors and not signal sender which is different. With the patent I can see many interesting apps to build. Imagine you go into the museum and as soon you are in reach of a painting the phone would display information to the painting. Or going into a store will send you info about discounts. However infrared is only one way communication, but it could trigger a software on your phone which then sends data over internet to the store.

NFC has a very short transmitting radius but can connect very fast and can send bidirectional information. Infrared has a very big radius but has only one way communication.

It is like your TV remote. You need to be in view with the TV and the TV can't send you data back to your remote.

if you are looking into ideas with NFC then keep the limit of data transfer speed in mind and that close proximity the devices need. But even with this limitations there are things which would work:
- Phone as car keys and starter
- kids toys. When they come close they react to each other.
- Kids security. Kids wearing an armband and as soon they come to close to the oven or leaving the house the parents will be informed.
- shopping cart in the brick an mortal store. You put your items in the shopping cart and you can instantly see total amount. At checkout the cashier just look at the display of the cart. No need to scan the items again.

Here is the article I found about Apple patent at the escapist: 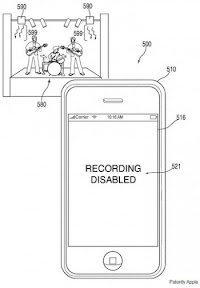 Piracy is a bad thing. We all know that, right? Right? But I'm also not a big fan of corporations taking away the rights of consumers to use their products in ways the designers might not have intended. Apple is patenting technology which will add the ability for future iterations of the iPhone to automatically detect whether the user is capturing video of a musical performance or a film presentation and disable the camera.

The technology involved is somewhat ingenious. Movie theaters, for example, already use infrared signals broadcasting to individual hearing-aid devices and Apple intends for future iPhones to detect these signals, clueing the device into the fact that its user is watching a film. If you decide to take out your iPhone and perhaps record the X-Men: First Class this weekend, and then possibly upload that file for everyone to see, then you are violating IP law. The proposed technology would prevent you from ever transferring the movie into bits stored on your phone.

The same goes for music concerts, except that performers would have to start blasting infrared signals out into the audience for it to be effective. This I'm actually in favor of, because the amount of schmucks holding up an iPhone at concerts has got to be reduced somehow. What happened to actually enjoying the show? What's with all the freaking pictures, people?

Another, even wierder possibility is for the iPhone to automatically place a watermark over any image taken, instead of disabling photographs altogether. So you might be able to snap a shot at that Lady Gaga show, but the URL to LadyGaga.com will be emblazoned all over it. Ugh.

Now, on the other hand, this tech could be used for good and not for evil, by allowing museums or other landmarks to blast infrared data to the iPhone so that you could get a description of the landscape or historical document you are seeing. Kind of like a digital tour guide without the dirty headset.